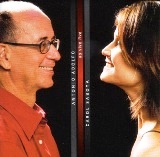 Although Brazilian pianist/composer Antonio Adolfo has been recording under his own name since 1992, his roots go back to the first wave of Bossa Nova music in the early 1960s when he wrote and accompanied music for singers Vinicius deMoraes, Rita Lee, Carlos Lyra, Elis Regina, Joyce (Silveira Palhano de Jesus) and many others. Ao Vivo/Live was originally intended to be a tribute to Elis Regina but was expanded to include a larger body of early, and essential, bossa contributors.

The album begins with an Adolfo piano solo that incorporates George Gershwin's "Rhapsody in Blue" with Antonio Carlos Jobim 's "Aquarela do Brasil" and "Girl from Ipanema." Adolfo then segues into a gentle samba on deMoraes/Lyra's "Voce e Eu" and the listener is transported back to circa 1963. His daughter, vocalist Carol Saboya takes the stand for Jobim's "Fotografia" in a lilting version done at a medium tempo that builds intensity by the second chorus. The medley of "Meu Limao" /"Meo Limoeiro" / "De Onde Vem O Baiao"/O Cantador" (composed by Dori Caymmi/Gilberto Gill/Ed Motta), contains a tune ("O Cantador") that may the only one familiar to Americans.

The following songs, so well known to bossa fans (north and south of the border), are rendered in both Portuguese and English including "Insensatez" from deMoraes/Jobim, "Wave" and "Passarim" from Jobim as well as another lengthy Adolfo solo piano presentation on "Carinoso"/"Bambino/Voce Me Da" from the pens of Caerensce/Debarro and Ernesto Nazareth. As an added treat, the forgotten "Sa Marina"(also known as "Pretty World") a tune that was a minor hit in the late 1960s from Sergio Mendez and Brasil '66, is now included in the songbook of Adolfo.

The album was recorded live at the University of Miami in 2005 and includes some audience sing-a-long on "Wave." Adolfo sports a fine supporting ensemble including guitarist Claudio Spiewak.

Visit Antonio Adolfo and Carol Saboya on the web.