By Geannine Reid
September 1, 2013
Sign in to view read count 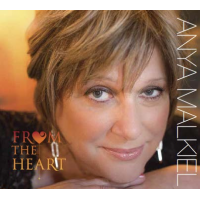 Anya Malkiel is a Bay Area-based vocalist who grew up in a musical environment in the former Soviet Union. Jazz was taboo, but would nevertheless become a vital part of her life. Malkiel states, "It was always the human voice that drove my musical aspirations." After leaving for the United States in 1990, she shared a stage with the Natural Gas Jazz Band and Chicago 6 on the West Coast festival circuit. This experience opened a world of choices, but with motherhood now taking priority she put her dreams on hold until the calling was just too strong to ignore: "I was just suffocating without music. Back home, even if I didn't sing professionally, I always had a group of friends with whom I'd sing. That was a great outlet for me, and suddenly I didn't have that outlet," says Malkiel. It was then she learned of the prestigious Stanford Jazz Workshop and there worked with the legendary Madeline Eastman to hone her craft. "When I sing," Anya confesses, "I often have Miles Davis' expressions in mind." This attention to phrasing and interpreting a melody is evident with Malkiel's debut album, From The Heart.

From The Heart consists of ten standards displaying a variety of styles and storylines. For Malkiel, the project was a long time coming. "I wanted to have an album, to have and share that experience," she notes. "I treated it as a recorded concert of a diverse collection of songs I love." Joined by pianist Randy Porter, bassist John Wiitala, drummer Jason Lewis, vibraphonist Christian Tamburr and Jim Schneider on saxophone and flute, her debut album immediately rings as an old soul, who is now ready to shine.

Malkiel's ability to capture the spirit of a song and interpret it in a way that is personal at the core is immensely compelling and the cornerstone to this outing's success as a collection of tunes from the standards library. Each selection is highly persuasive and intended to make a fresh statement on these well-known melodies and stories. Billie Holiday's "Fine and Mellow" opens the album and there is an immediate intimacy that can be heard in Malkiel's singing, with a tone that is warm and having the ability to articulate lyrics and their meaning clearly and with complete focus. Christian Tamburr provides a nice bossa inspired arrangement for "Invitation" with Malkiel utilizing a strong command of phrasing and slurring into notes with a strong sense of the jazz tradition. Tamburr provides tasteful commentary during the melody and an exquisite buoyant solo.

"You Must Believe in Spring" finds pianist Randy Porter voicing a commentary of deep sonority that is totally complementary to the richness of Malkiel's voice as the two navigate this classic in a free flowing ballad tempo. "I Thought About You," normally a subdued ballad, is remodeled into a joyful groove, the influence of Miles Davis' phrasing can still be heard in Malkiel's interpretation on the melody and bassist John Wiltala propels the selection with a toe tapping drive. "Under Paris Skies" brings to mind the styles of Judy Garland as the group effortlessly flows between a waltz feel and swinging four four feel.

Subtleties abound in a swinging version of "There'll Never Be Another You." Small vocal ornaments and slurs crop up here and there on this well-known melody that is always on-point to enhance the phrase. Malkiel digs deep and takes an enjoyable chorus of scatting that is rich in the jazz heritage. "Pannonica" displays Jim Schneider's excellent flute skills and Schneider's saxophone work shines on "Fine and Mellow," providing a resounding note of joyful playfulness. The musicianship of the supporting musicians is exemplary throughout. They perform with responsiveness and precision that always supports Malkiel's musical vision.

Fine and Mellow; Invitation; Pannonica; Lullaby of the Leaves; You Must Believe in Spring; I Thought About You; There’ll Never Be Another You; Under Paris Skies; Beautiful Love; Sometimes I Feel Like a Motherless Child.