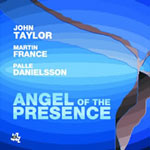 British pianist John Taylor has been an active player since the late 1960s with a range of partners including trumpeter Kenny Wheeler, reedman John Surman and drummer Peter Erskine. But, excluding his Azimuth trio with Wheeler and singer Norma Winstone, he has put out few releases as a leader until the beginning of this decade. Still, his manifest presence pervades every recording he's played on. In some cases, like his 1990s work with Erskine and bassist Palle Danielsson, so much so that it's hard to know who's really the leader—if, indeed, there is one at all. That very pursuit of collaboration in the purest sense makes Angel of the Presence one of the best piano trio records of 2006.

Taylor's 2003 trio recording Rosslyn (ECM), while an undeniably strong effort, was perhaps a little too rarefied for its own good. His dense harmonic approach has always contrasted with a finessed touch, but Rosslyn weighed a little too heavily on abstraction, despite some empathic interplay with bassist Marc Johnson and drummer Joey Baron. Angel reconvenes Taylor with Danielsson, and the same chemistry that elevated their work in Erskine's trio is at play here. Drummer Martin France will be least-known to those who haven't got their finger on the pulse of the British scene, but he's no stranger to Taylor, having worked with him previously on numerous occasions.

One of Taylor's greatest strengths is his ability to apply his sophisticated harmonic mindset to material by others, bringing it completely into his own universe. He's covered Steve Swallow's "Vaguely Asian and "Up Too Late before, but never in a conventional trio setting. Both groove in their own way, but farther afield of Swallow's more persistent sense of swing.

The balance of the material comes from Taylor's pen, and his roots in the music of Bill Evans are unmistakable. But so, too, is a modernistic sensibility that finds him in thematic territory that's less obvious but just as compelling. The bright and swinging "Dry Stone is a perfect example of Taylor's ability to take a thematic motif as an improvisational foundation, and evolve it throughout the course of the tune in ways that are unpredictable, yet seemingly inescapable.

While the virtuosity of these musicians is never in question, it's also never the point. Angel of the Presence succeeds where so many other piano trios fail by creating a distinctive collective sound where solos abound but no single voice dominates.