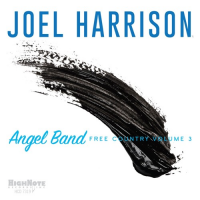 Possessed of restless creativity and a desire not to repeat himself, guitarist/vocalist Joel Harrison took a 14-year hiatus between albums in his Free Country series to release over a dozen other efforts before returning with Angel Band: Free Country Volume 3. Building on the foundation set by the first two albums, he recruits a few returning musicians as well as a menagerie of new talent, including a handful of vocalists.

Harrison takes an amalgamation of folk, country, bluegrass and even gospel, making it into what can best be described as "Jazz Americana." By the time the album-opening "America the Beautiful" reaches its halfway point, it has become obvious that Harrison and company have availed themselves of these genres without losing sight of jazz's improvisational nature. His exceptional skill as a composer is felt throughout, taking everything old and making it new again, whether he's flipping old songs like Johnny Cash's "Ring of Fire" on its head or putting his own stamp on a traditional gospel tune such as "We Shall Rise." Even the classic bluegrass picker, "Lost Indian," gets a funky, anxious treatment as the album's penultimate song.

While it's hard to listen to Angel Band: Free Country Volume 3 and say that one song stands out more than the rest, something should be said for Harrison's choice of using the famous "Blue Eyes Cryin' in the Rain" as the album-closer. Narrowing Harrison's band to a quartet—just his guitar, alongside organ, bass and drums—it is the most staggeringly melancholic interpretation that this much-covered ballad has seen yet. Wisely eschewing familiar vocals, he pours tenderness into a misty-eyed instrumental rendition of a classic country tune that leaves a sense of grief and regret that abides long after his guitar fades away.

Angel Band: Free Country Volume 3 may not be everyone's cup of tea, but it sure goes down easier than might be expected.