By Mark Corroto
September 2, 2007
Sign in to view read count 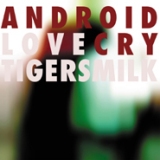 Just as a graphic novel will never be awarded the book of the year honors, Android Love Cry will never be acknowledged as album of the year. Why? Think about science fiction writer Philip K. Dick. Science fiction is your first clue, we don't suppose great literature can be science fiction, but Dick wrote some fantastic fiction, even a story (forty years before Philip Roth) pondering what if the Nazi's had won W.W.II and occupied the United States. But you'll never see his name listed with the greatest writers of his time, although his works have been turned into motion pictures including; Minority Report, Total Recall, Paycheck and Blade Runner.

What does Blade Runner have to do with Android Love Cry from Tigersmilk? The original title of the 1982 Ridley Scott film was Do Androids Dream of Electric Sheep? and certainly the music made by this trio could be the soundtrack for a modern remake of the film.

Rob Mazurek (Chicago Underground, Mandarin Movie, Exploding Star Orchestra), Jason Roebke (Rapid Croche, Fred Lonberg-Holm trio) and Dylan van der Schyff (Talking Pictures) certainly mine the deep space of machine logic, meshing freely improvised sounds against the orbiting debris of computer circuits. As he is known to do, the cornet-playing Mazurek pastes echoey notes into the atmosphere that bump and mutate against his laptop/synthesizer. Mazurek is a sort of muted Miles without the 4/4 or later funky beats.

Each piece incorporates some form of technology: machine sounds, echoes, minimal drone, or laptop manipulation against the human touch of the players. Percussionist van der Schyff relishes his freedom from standard beats, filling space with the boom of his bass drum or the clacking of sticks-on-sticks. He paints, accents, and pulses energy without a formal structure.

These thirteen pieces lead you into flights of imagination—story lines appear, old science fiction movies like Silent Running, The Andromeda Strain or The Omega Man rerun in your head. But this music isn't your "Hearts of Space" smooth ambient sounds. This trio meshes improvisation seamlessly with the science. Bassist Roebke is quite adept at adapting his double-bass to his partners and their effects. Although the highlight of the disc might be the 56-second "Circuit Overload Demise, where he opens with a monstrous attack of bass energy before playing against drummer and computer plunks, the display of control and power is awe-inspiring.

Tigersmilk suggests that we shouldn't count the androids out quite yet.