By Mark Sullivan
March 3, 2022
Sign in to view read count 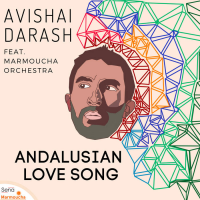 Israeli pianist & composer Avishai Darash has always made a deliberate effort to combine his Middle Eastern heritage with Western influences. He considers Andalusian music to be the origin and core of Western music; this album is a love song to that music and its journey and evolution from the MENA region (Middle East and North Africa) and into southern Spain. On this album Darash leads his largest ensemble on record, the Marmoucha Orchestra which is essentially a chamber orchestra, with brass, woodwinds and strings, along with a jazz rhythm section, oud and percussion.

The title tune opens the set with a sprightly dance rhythm and a sinuous melody which features the composer's piano, along with a full array of orchestral colors. Trombonist Pablo Martinez takes a commanding solo, capped off by a brief restatement of the theme. "Kartana" slows things down with a lyrical orchestra theme, then makes space for Mohamed Ahaddaf 's oud solo. "Longing-Sadness" focuses on the strings, but again features the oud in a solo role. "Twishya Hijaz El Kbir" is distinguished by Arin Keshishi's bass solo, as well as a percussion section spotlight.

"Prakriti" is a rhythmic workout for the piano and the rhythm section, showcasing Darash's piano playing as well as Yoran Vroom's drums (along with the other percussionists). "Mohamed's Blues" also focuses on the core band, including another bass solo. "The Day After" reintroduces the whole orchestra, with the strings, brass and woodwind instruments making a strong impression. "Arriving Home" concludes the album with an upbeat rhythmic groove, an exciting ending to a powerful multifaceted collection of music. Darash's best album to date, Andalusian Love Song continues his evolutionary path as composer and pianist.