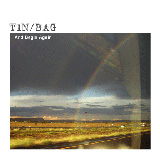 And Begin Again documents an often overlooked side of a small group of up-and-coming bi-coastal improvisers. Los Angeles-based trumpeter Kris Tiner (Empty Cage Quartet) and New York- based guitarist Mike Baggetta deliver an attractive album of duets and quartet improvisations that resonate with a fragile harmonic maturity typically unheard in the work of such young, occasionally impetuous artists.

The duo's previous album There, Just As You Look For It (pfMentum, 2005) featured the duo working through texturally ambiguous and experimental pieces. This album, recorded in less than optimum conditions, finds the duo in a relaxed, lyrical mood.

Similar to the taxing conditions that preceded the David S. Ware Quartet's luminous Balladware (Thirsty Ear, 2006) session, Tiner and Baggetta were exhausted from touring and could only summon enough energy for a handful of resonant ballads. What initially seemed like a limitation became a focal point. Their playing on these selections is rich, emotive and more vulnerable than their typical work.

Invigorated by the presence of percussionist Harris Eisenstadt and clarinetist Brian Walsh on two extended pieces, "Recourse To Unison" and the three part "Half Life" suite, Tiner and Baggetta rise to the challenge and engage in tricky counterpoint, spacious free-form explorations and edgy ensemble interplay. Rich with pregnant silences and sudden bursts of activity, these long-form suites encapsulate the quartet's wide-ranging technique.

Tiner and Baggetta's sense of communicative banter is personable and polite. Never overstepping the other's bounds, they provide subtle contrasts and complements to the others statements. Sparse, melodic and understated, And Begin Again offers a different side of these young and up-and-coming artists talents.

And Begin Again; Bienvenue; Recourse to Unison; For Wadada; The In-Between; Half Life: One Brief Moment; Half Life: A Slight Shift; Half Life: Prize; Back from the Eternity; Fishers of the Star.