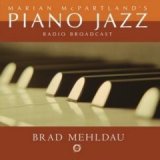 The pianist Marian McPartland gave an outdoor concert in my small Midwest community several summers ago, and attending the event led me to a realization about the appeal of Piano Jazz, her syndicated, international jazz show that has been running for 27 years, the longest streak of any cultural program to air on NPR. The crowd's response to her trio was at best politely receptive, so midway in the program McPartland simply asked the audience if there was anything they'd like to hear. "Take Five!" someone in back bellowed out, and before my eyes had finished rolling in my head, she was into the tune. Following completion of the Dave Brubeck/Paul Desmond hit, the rest of the concert was all requests—most of them popular favorites not specifically associated with McPartland.

In a similar fashion, McPartland's sixty-minute radio exchanges with guest musicians each week connect with a audience that finds the music as non-threatening and accessible as the classy but gracious and personable host herself. In talking about and demonstrating a music that can easily become a blood sport— producing victors and also-rans, artists-presumptive and weak pretenders—McPartland manages to keep it all on the level, treating listeners to over 30 minutes of pleasant piano sounds while, almost inadvertently, providing painless insights into the music and its makers.

The show featuring Brad Mehldau is among the approximately forty programs that have been made available commercially on CD. An unexceptional edition of Piano Jazz recorded in 1996, its distributor must have reasoned that Mehldau's star has risen sufficiently to warrant release of the date some eleven years later. The best exchanges between McPartland and her guests are those in which both performers' enthusiasms come across as genuinely felt, as expressed through their personal reflections about the music as well as their own music-making. To date, perhaps only two sessions have excelled sufficiently in both areas to merit repeated playings: Oscar Peterson's and Bill Evans,' with the latter's being, by the host's admission, a personal favorite.

The Oscar Peterson program, recorded in 1978, catches the main successor to the Art Tatum legacy in characteristically good form. He gleefully alludes to his own prowess and shares a few of his tricks (e.g. playing the melody in chromatic seconds for extra bite and brilliance). Moreover, he proves as eloquent, fluent and smooth verbally as he is pianistically—a striking contrast to the more modest and deliberative comments by Bill Evans. There's no small amount of "exhibitionist" patter and banter to go along with the dazzling pianistics—and why not? If there's any musician for whom a pose of modesty would seem unbecoming, it's a prodigious player like Peterson.

One of the delightful moments occurs when the pianist does, in fact, hint at his competitive instincts and take-no-prisoners approach, revealing that even with his best trios all three musicians would take the stage each night with the attitude of "I'm going to waste the other guy." And when McPartland says some nice things about George Shearing's pianistic skills, the guest comes back with a story about Shearing being flummoxed by an Oscar Peterson performance. Even as he tells the story, his voice takes on the triumphant, self-satisfied tone of the reigning and peerless master.

About the music itself and its listeners, Peterson makes it clear that he takes nothing for granted. The music is both his hobby and his profession, and he works relentlessly at both, whether the listener is a face in the crowd or simply himself. He endorses Czerny as a woodshedding tool and surprisingly says that "Satin Doll," despite the abuse it suffers under the hands of numerous pianists, is still one of his favorite tunes. Then he demonstrates how he freshens up the tune with "Auf Weidersehen" as a counter-melody (one of several musical highlights, along with sparkling if condensed performances of "Old Folks" and "Body and Soul").

As usual, one wishes for the opportunity to write some of the questions for McPartland on such occasions. For instance, does Peterson know that drummers are "terrorized" by him because of his relentlessly powerful pace and tempos that require percussion-athletes (with left ankles made of ball bearings and steel)? Drummer Jeff Hamilton once related that playing a set with Peterson was simply a matter of hanging on for dear life. How does the pianist in turn perceive his drummers? Who was his favorite? Or did he prefer his early trios which, like pianist Nat Cole's trio, excluded drums altogether? Peterson used to be a louder "screamer" than even Keith Jarrett. Was he consciously aware of doing it? How did he break the habit, and why? Finally, it seems that an hour-long interview of Oscar Peterson with no mention of Art Tatum (or for that matter any pianist other than Shearing) has partly lost its way.

The Bill Evans session was also recorded in 1978, less than two years before his death and at the time of bassist Marc Johnson's joining the trio. The seminal pianist is in rare form, not only playing beautifully but offering an abundance of insights into his career and thought process...

Evans repeatedly stresses the importance of knowing a tune's "structure," then demonstrates why that goes beyond the number of bars, fake-book chord progressions, and written melody. Everything proceeds from an understanding of "form," prompting Evans to insist that "knowledge must lead intuition."

He reveals and demonstrates the "anticipatory phrasing" that he had been working on at the time, making clear the method behind the urgency and tension in his late playing, mistakenly labeled by some Evans detractors as "rushing."

Evans surprises by first telling McPartland that he prefers solo piano to playing in a trio, then explaining that he doesn't feel sufficiently equipped to go it alone.

He talks about his influences (not just piano players but big bands and wind instrumentalists), his early musical gigs (polka bands, boogie woogie, society jobs), and is unusually generous in his praise of McPartland's playing.

And he reveals that in twenty years his trio rehearsed no more than four times—each a "talk-through" rehearsal before a concert.

If there's a major regret about the conversation with Bill Evans, it's the host's not having the presence of mind to ask him about tone. As the recording itself makes apparent, no pianist plays "deeper" into the keys, extracting a richer, more complex piano sound. (My suspicion is that much of it is biological. Mechanically, Evans was born to play the piano—look at his body, shoulders, and the diameter, not just length, of his fingers. But if he has any tricks or tips, McPartland along with her piano-player listeners deserve to know.)

Evans' playing on this occasion is both powerful and sublime, offering McPartland quite a challenge during their duets because of the turbulent pull of his rhythmic constructions. In her liner notes, the host confesses to some personal intimidation and to initially having a sense of "playing against the time." Once past this threshhold, she can't contain herself, either in her praise of Evans or her childlike excitement at the very thought of playing with him. The experience clearly represents for her a high point in a many-faceted career. No Bill Evans' fan or pianist should pass by an opportunity to hear this exchange.

The piano sonorities sparkle with gemutlikeit and pyrotechnics on the Peterson date just as they resonate with power, depth and emotion on the Evans outing. On the Brad Mehldau session, however, there's not much life or energy in the playing of either the guest or the host. At the same time, the young prodigy plays clean if deliberative, sharply defined contrapuntal lines, using his left hand on the opening Cole Porter tune ("From This Moment On") to create melodic motifs independent from the main strain in his right hand.

There are a few minor surprises during the conversation. Mehldau's writing about his music reveals a mind conversant with theory, aesthetics and history—in fact, he may be one of the music's bona fide intellectuals. Yet I can't recall hearing so many "yeah's" on Piano Jazz in response to McPartland's frequently innocuous comments. Also, who could have predicted that Mehldau, usually so insistent upon making space between himself and his trumpeted predecessor and putative inspiration, on this occasion would invoke the name of Bill Evans as someone having an "influence" on his playing? In fact, McPartland may have gone in unnecessarily cautious, taking extra care not to upset a reputed temperamental artist.

In all fairness, with Peterson there was no generation divide and with Evans only a single generation, whereas the two generations separating Mehldau from McPartland may have contributed to the deference and respect that rob this exchange of some much needed give and take not to mention vitality. Also, give Mehldau— along with Peterson and Evans, Brubeck and Chick Corea—credit for not being too proud, preoccupied, or parsimonious to accept the invitation. There are several "major" players who have thus far declined to appear on Piano Jazz, with its devoted and widespread but comparatively small audience and tiny budget.

Nevertheless, this is one 30-minute program of music that even Mehldau's devoted followers may judge not worth the asking price.

Visit Brad Mehldau and Marian McPartland at All About Jazz.