By Tyran Grillo
January 7, 2016
Sign in to view read count 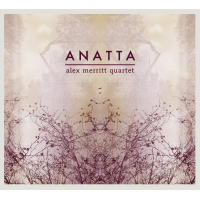 It should be no wonder that Alex Merritt should be a practitioner of Vipassanā meditation. The English tenor saxophonist translates that very focus on mindful breathing to the horn with seamless concentration and awareness of heart. A child of Cambridge and graduate of the Birmingham Conservatoire, Merritt has found a character-building groove among bassist Sam Lasserson, pianist John Turville, and drummer Jeff Williams. As the Alex Merritt Quartet, they bring five years of connectivity to Anatta.

Immediately striking about this studio debut is its collective achievement in sound. It has a quality that, to paraphrase a Milton Nascimento lyric, holds a teardrop of sun in its nocturnal mouth—which is to say, less a study in contrasts than of yin and yang. The group's palette draws from jazz and contemporary classical sources with equal integrity or, as Merritt himself puts it in the album's liner note, "with homage to the tradition but an eye to the future."

Theory is put into practice by the ordering of tunes. The set list is significantly framed by Thelonious Monk, whose "Ugly Beauty" and "Pannonica" mark the beginning and ending of a spectral journey. In an e-mail interview, Merritt credits drummer Williams for turning him on to Monk, in whose thematic allegiance he notes a kindred spirit. As slick as they are adhesive, Merritt's interpretations make for a natural fit, meshing well with Turville's pianism.

Merritt's tonal riches show equally true colors in Eubie Blake's "Memories Of You," which in the present treatment reveals shades of Steve Lacy and Stan Getz by eschewing needless exhibitionism. Rather, Merritt breathes in a conscious yet intuitive manner, attuned as much on the inhale as the exhale. "I am a big fan of ballads," the bandleader admits. "I have always been drawn to the possibilities to create at slow tempos when there is that much space to play with. The studio proved a nice place for this dynamic, hence the inclusion of the ballads here." Their inclusion is indeed a fine litmus test for a gentle resolve, which bears out in distinct combinations of shape and texture.

Still, these cats clearly know the value of swing, as in "For Peter Schat." Based on John Coltrane's "Satellite," it is one of five Merritt originals and affords a deeper glimpse into the poetry of this young talent. The band is most cohesive as it turns this familiar progression into something fresh. Schat, best known for his book The Tone Clock, was, like French composer Henri Dutilleux, enamored with jazz. Hence "For Henri Dutilleux," which balances out that other tribute with a balladic energy that holds its needles among the evergreens. Merrit describes the tune: "It is actually a reduction for quartet of a chamber piece I have been writing inspired by Dutilleux's orchestration. Dutilleux honed a very personal language over a long and surprisingly unprolific career so I don't know how much I captured the essence of his style as I was just 'dipping my toe,' but I like the effect of the simple motif being repeated, transposed and re-framed harmonically—the reference point being the close of his First Symphony."

The more self-contained originals are no less inspired. The cheekily titled "Justin Time-berlake," based on the standard "Just In Time," spotlights the backing trio, of which Williams is the heartbeat, while Lasserson's bass monologue carries the torch of this swing with some serious flair. "Conn Artist" proves the band's smooth, overlapping qualities. The late-night jazz club feel works at a level of primal absorption, as also in the title track, a classic in the making led with poise.

The album's title—a Buddhist term denoting perception without self, a total communion with activity—might be said to be the reason behind jazz's existence, a philosophical starting point for any improviser. But what Anatta makes clear is that it also applies to the receiver, as listening constitutes its own form of selflessness. Merritt is therefore not only an artist to watch, but also to listen to, as one would a dawn chorus: with eyes closed and mind opened.