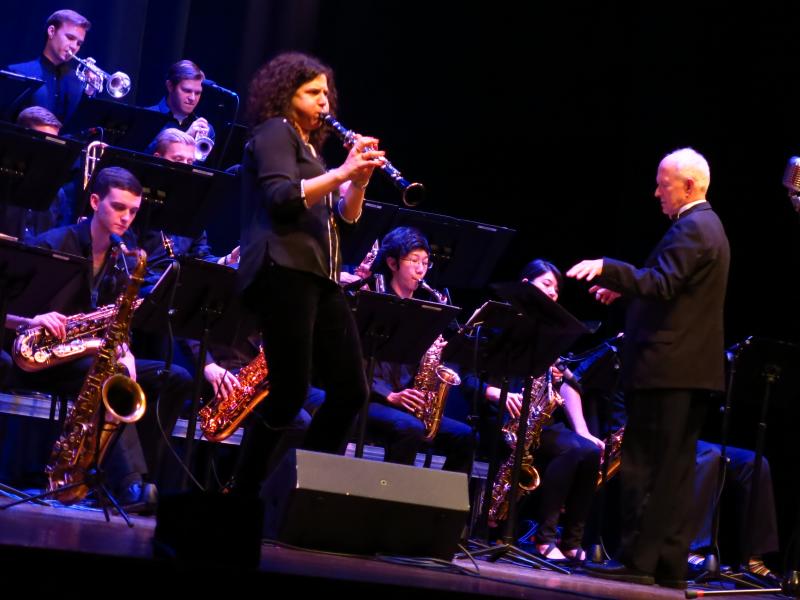 By PERRY TANNENBAUM
April 27, 2017
Sign in to view read count

Softer, louder, and softer again, Cohen wailed on until the band mostly peeled away so she could blaze through a final cadenza. It felt like everyone had stopped to watch something primal and sacred.

We've known for a long time that Anat Cohen can electrify audiences whenever she picks up her clarinet and plays. After her recent residency at Davidson College, we can now proclaim that she has a similar effect on jazz students—and faculty. At the public concert that concluded the residency, Professor Bill Lawing, after leading the Davidson College Jazz Ensemble behind Cohen, struggled to find sufficiently effusive words to describe what she had achieved in a few short days. To adequately measure it, Lawing said, we would need to have heard what his band had sounded like when they began rehearsals.

The concert itself followed an arc similar to the one hinted at by Lawing, with some fairly radical advances along the way as the band's confidence grew and their soloists had more space to shine. Before Cohen made her entrance, the Jazz Ensemble made theirs with an arrangement of Slide Hampton's "Go East, Young Man" where scant spots were doled out for pianist Tyler Holman and guitarist Matthew Bell to play on. Even when Cohen appeared with her clarinet, the impulse to showcase band members continued in the first two arrangements by Oded Lev-Ari. Anat's solos were both cool and hot on Ernesto Lacuona's "La comparsa" in between Ensemble interludes. Then Cohen picked up the tenor sax that was pre-set at centerstage near her mic and played a bunch of solos on Johnny Griffin's "Do It" that never quite gathered momentum, as the collegians' intervening solos swept from one side of the five-person sax section to the other. It was a good time for Cohen and the band to get more relaxed as she spoke briefly about working with the students earlier in the week and tested our familiarity with Julie London by way of moving on to Lev-Ari's arrangement of "Cry Me a River."

Returning to clarinet, Anat gave us our first really deep swig of her soulfulness in a chart that confined the Ensemble to taking the first half of the bridge—both during the first pass through the melody and during the clarinetist's solo. She opened up even more compellingly with a cadenza to cap off the out chorus. By some sort of alchemy, the band became more articulate in their soloing after Cohen told the story about how she and her combo were jamming one night on Luiz Bonfa's "Samba de Orfeo" and found themselves playing Satchmo's vintage "Struttin' With Some Barbecue." Referring to the Lev-Ari medley that resulted, Anat said, "So we decided to make it official." Perhaps the spontaneity crept into the band by osmosis through Cohen's anecdote, but as we went into intermission, the band finally seemed to be enjoying the jolt of playing with their celebrated new mentor.

ADVERTISEMENT
It seemed cruel to pare the Ensemble down to combo size at the moment that everyone was rounding into top form, but there was a density to the arrangements of Duke Ellington's "The Mooche" and Cohen's "Tfila" that lifted the concert to a higher, tighter level. On Cohen's arrangement of Duke's composition, we finally heard Anat's full magic on clarinet for the first time. "Tfila" was by far the superior foray by Cohen onto her tenor sax with a couple of nice spots by Ken Lee, switching here from alto to soprano. There was a distinctive part written for trumpet embedded in the out chorus after Cohen's sublime solo and a superb coda for trumpet and a pair of saxophones. A new infusion of jubilation spread through the hall as the remainder of the Ensemble returned, mainly to add muscle to the backup as Cohen dominated the soloing more completely.

In her spoken intro, she promised to combine the traditional "Tiger Rag" with some Israeli falafel, and there were indeed some klezmer flavorings in the prelude before Cohen and the band launched into the tune with its lusty trombone glisses. Dylan Hyman on baritone and Lee, back on alto, had some nice moments here. Cohen saved her most stunning trad explorations for last. Though she shot encouraging looks to the band and even praised bassist Tom Champion for mastering the difficulties of the bass-line and keeping it in three, Cohen herself owned Fats Waller's "Jitterbug Waltz" and took it to exultant new places.

Anybody who had come doubting Cohen's power was likely converted by her amazing work here, but she had one last marvel to reveal. Invoking the names of arranger Tommy Newsom, diva Billie Holiday, and King of Swing Benny Goodman in her remarks, Cohen softly wriggled into an epic arrangement of "What a Little Moonlight Can Do" over the drums and then Holman's spare piano. The intensity of Anat's playing seemed to draw the rest of the band into the accompaniment magnetically, and the energy of the band seemed to spark a quicker tempo from the soloist, along with an onrush of inspiration and virtuosity. Softer, louder, and softer again, Cohen wailed on until the band mostly peeled away so she could blaze through a final cadenza.

It felt like everyone had stopped to watch something primal and sacred. Everyone except Anat, of course: standing, crouching, and writhing at the vortex of it all.