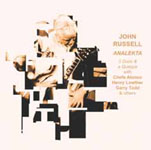 This release features three duos recorded at John Russell's monthly Mopomoso concerts, plus a large ensemble captured at the Freedom of the City festival in 2006. Each of the duos finds the guitarist in the company of a player not often recorded—saxophonist Garry Todd, trumpeter Henry Lowther and saxophonist/percussionist Chefa Alonso—but all deserving wider exposure.

Russell and Todd first played together in the 1970s, sharing a debut album on Incus records in 1975. The duo here is their first recorded release since then. Despite only appearing occasionally, Todd is in fine form, spinning out taut, pithy phrases that have more than a pinch of jazz in them. Throughout, Russell's guitar characteristically straddles the background and foreground. Predominantly playing chords—albeit surprising and inventive chords—he supports his playing partner but constantly commands the listener's attend. He typically coaxes a full, ringing sound from his guitar and propels the music along; the pace rarely flags with Russell about.

Henry Lowther is an occasional improviser, being far more commonly heard in mainstream jazz or classical ensembles, but one would never guess that from listening to him improvise. His pure tone and clean articulation are a delight, and draw an appropriate response from Russell, who demonstrates just what a sympathetic improviser he is. The combination is a pairing made in heaven.

Chefa Alonso alternates between percussion and soprano saxophone here; opening with a prolonged barrage of percussion accompanied by occasional restrained support from Russell. When she turns to saxophone, she produces some knotty playing full of unpredictable twists and turns; the piece is brought to a satisfying conclusion by some full-on soloing by both players.

The album closes with a nine-piece group—"a Quaqua in Russell's parlance—that mixed London-based players with visitors from Belgium, Germany and Spain. With so many players, it would be easy for the music to become a cacophony or degenerate into a series of incidental exchanges. That neither happens here is largely due to Russell himself. His guitar is central to the proceedings—goading, guiding, leading, always keeping things focused. There is an impressively wide array of sounds and dynamics here, and Russell ensures that they combine into a coherent and satisfying piece of music.

The Bite; Blart; Chamarileros; So it goes.