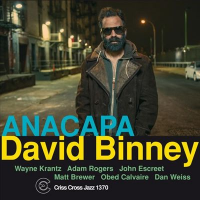 Listeners who have followed alto saxophonist David Binney's extensive discography know that rock is an intrinsic ingredient of his music. While the rock influence is almost always present, Binney's regular releases and appearances on Criss Cross Records have usually remained rooted in acoustic jazz. On Anacapa, Binney takes Criss Cross Records in a much more electric direction than the label has ventured before.

With a total of ten musicians credited with contributing to the music, Anacapa ranks among Binney's most ambitious work. It continues in a similar direction as his 2011 release, Graylen Epicenter and features entirely original music by Binney that includes synthesizers, distorted guitars, and morphed vocals. A unique blend of rock and jazz aesthetics, Anacapa finds Binney in a comfortable environment doing what he does well.

The album's short introduction, entitled "She Loves" begins with a shimmering synthesizer pad and a throbbing dance beat. As Binney's harmonized, distorted sax line progresses, the synthesizer accompaniment builds and the harmony becomes increasingly dissonant up until the long fade out. The second track, "The Golden Zone" displays Binney's talent for blending angular, contrapuntal melodic lines with the harmony and backbeat of rock. A lengthy and intense solo from Binney leads the song to it's final theme where new melodic voices keep layering in to create a densely moving texture.

Throughout the album Binney balances his talent for bold, anthemic melody writing with his knack for superimposing multiple, interweaving melodic lines. "Massive Humanity" kicks off with a frenetic, ostinato line from the guitar and bass, before Binney introduces a catchy, repeated melody. The slow, hard rock backbeats of tracks like "Heart Shaped Mind" and "Anacapa" give Binney a wide canvas on which to paint in his solos. As his solos grow in intensity, the band responds with matched energy that pushes the music to a driving plateau.

Binney's assertive melodies dominate the album and his exceptional arranging abilities keep the music from growing stale. Many of the compositions contain several different thematic sections that are broken up with the improvisational segments. Distorted vocals and synthesizers help underscore the melodic material as the pieces build. Occasionally, in the instances where the vocal lines contain lyrics, as on "Waiting for the Blast," the lyrics seemed to fit awkwardly with the melody, but the wordless vocals on other tracks seemed to fit well with the music. Anacapa doesn't find Binney moving in many new directions, but is another credit to his name as unique and endlessly creative composer.