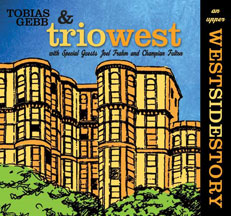 Trio West plays extensively on the New York jazz scene. Its members have shared the stage or studio with a wide range of artists, including Cab Calloway, Steely Dan's Donald Fagen, Lenny Kravitz, Joe Lovano and Larry Goldings. The group's second release is a straight-ahead offering that includes original songs, jazz standards and other selections. The laid-back introduction to "Poinciana, What Time Is It?" is a bit misleading, for the song quickly gains speed with Gebb and Miner engaging in a happy-go-lucky background stroll as Zvulun takes the lead, the pace changing here and there as the song moves along. Gebb's work on the cymbals and snare stand out, and so does Miner's bass, though the piano is clearly the leading instrument.

"The Barnyard," one of four songs composed by Gebb, brings in Frahm on tenor sax. This track is aptly titled, as the music sets to mind the vision of strutting roosters, wallowing pigs and small children playing with them. It's a fun, energetic tune.

Fulton joins Trio West and Frahm for "Autumn Serenade." This charming arrangement of the standard is highlighted by Fulton's soft, alto-flute voice and Frahm's tenor solo. Though faintly in the background, Trio West isn't obscured by their presence. On the contrary, all three instruments are felt, making for a well-balanced rendition. Fulton and Frahm appear again on the delightfully romantic "What a Little Moonlight Can Do," in which the vocalist also shows her scatting ability in a call-and-response sequence with Frahm. After a fast pace for most of the composition, the ensemble downshifts to a swing mode toward the end.

Poinciana, What Time Is It?; Brasil Bela; The Barnyard; Star-Crossed Lovers; Autumn Serenade; Cute; Wil O'the Wisp; What a Little Moonlight Can Do; Two by Two; How Deep Is the Ocean; The Monument (Soldiers and Sailors); And I Love Her.