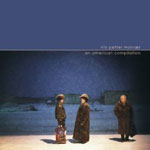 Molvaer's debut came in 1997 with the release of Khmer on ECM. An American Compilation, Molvaer's debut on Thirsty Ear, highlights tracks from earlier releases but also serves as a sneak preview of sorts for two new American releases by Molvaer scheduled for later this year: ER, which has already heralded rave reviews internationally, and Streamer, a live album.

Although An American Compilation is a "greatest hits record for all intents and purposes, it actually flows quite nicely. The energy peaks at certain points and levels out at others. Fast-paced tracks are followed by slower jams, giving the album a consistently interesting feel.

"Water is the album's best, a solid introduction to all that is Molvaer. "Nebulizer features the trumpeter soloing over a standard drum 'n' bass beat, a sound that is revisited throughout An American Compilation. Immediately following this lively and upbeat selection, Molvaer relaxes things again with "Kakonita, a soothing, textural track with multiple layers of ambience but no rhythm track to speak of. A "Kakonita remix follows, echoing the lush landscapes of Molvaer's Scandinavian homeland.

An American Compilation seems to slump with some of the beats added to the mix. "Solid Ether and "Darker, with a Michael Jackson-esque 1980s electro-funk feel, just seem dated, bland and uninspired. When Molvaer keeps it cool, his styling and technique shine and the sound is superb. In these moments An American Compilation is listenable, but when he takes a turn down Lounge Street, the record becomes a bore.

"Vilderness, recorded live in Hamburg, brings the beat back. Molvaer lays out over a solid breakbeat, sounding more modern and inspiring images of b-boys and b-girls hitting the floor, his trumpet egging them on and toasting the soundsystem.

This sort of back and forth sums up An American Compilation—when things are good, they are really good. I see Chet Baker and Miles Davis in a cutting edge, cross-generational conversation with Crazy Legs and Roni Size. When Molvaer turns towards house music for inspiration, things get too Euro-trashy for my tastes. Either way, ER is something to look forward to, and Thirsty Ear has done well to introduce this significant artist to American audiences.