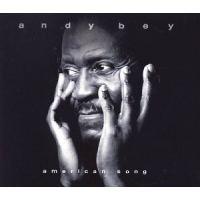 The Great American Songbook has rarely been treated to a reading as beautiful as the one the masterful Andy Bey delivers on his newest disc. Bey’s deep dark baritone voice and deliciously deliberate diction breathe new life into ten of America’s most beloved standards, distinctively arranged by Geri Allen. Accompanying himself on piano, Bey is able to regulate the tempo of each piece for optimum dramatic effect, and his bandmates—guitarist Paul Meyers, bassist Kiyoshi Kitagawa, drummer Mark McLean and a horn section featuring the great Frank Wess—are with him, all the way.

Beginning with “Never Let Me Go,” the singer quickly shows how he’s going to take all the time he needs to explore the deeper meaning of a lyric. On “Prelude To A Kiss” Bey delivers a moving interpretation of the classic that Duke himself would have had to applaud. Three more selections of Ellingtonia, “Caravan,” “Lush Life,” and “Satin Doll,” are each, in their own way, similarly admirable. The other standards, “Speak Low,” “Angel Eyes,” “Midnight Sun,” “It’s Only A Paper Moon,” and “Lonely Town,” are also given unique treatments requiring reams to be adequately described.

It is not only Bey’s beautiful baritone that gives him and the date a truly singular sound. In spite of the sheer power of his voice, he manages to invest each song with a vulnerability that touches listeners’ hearts in places that few singers are able to reach. There’s an honesty here that’s more than refreshing, at times it’s almost heartbreaking, as much for its own sincerity as for other vocalists’ lack of it. His expressive range is amazing and his command of nuance matchless.

The date is an emotional roller coaster in the best sense of the term—it’s actually fun exploring so many sentiments with someone who is so obviously happy just to have survived and lived to tell the tale. At Le Jazz Au Bar, with saxophonist Gary Bartz replacing Wess in the horn section, Bey treated a full house to selections from the new disc and several songs from his other recent successes, commanding the crowd with a good deal of personal humor mixed with the music’s own emotions, proving that he is indeed a national treasure that has been sadly undervalued for much too long. His is a talent that is more than timeless. It’s priceless.