By FRIEDRICH KUNZMANN
October 27, 2019
Sign in to view read count 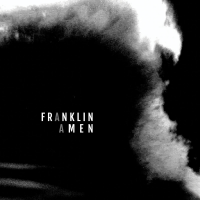 On Joseph Franklin's sophomore effort Amen, the Australian bassist and composer delivers an intricate web of patterns which he creates in interplay with fellow compatriot Marc Hannaford's ominous piano stabs and Satoshi Takeishi's experimental and highly dynamic drum work. Each composition goes through different stages—from dark and menacing to silver and dreamy— from slowly pulsating, almost stagnant to driven and lively. Recorded at the Bunker Studio in Brooklyn, the trio lays out compositions that seamlessly glide between the composed and the improvised, while demonstrating a keen ear for each other.

Franklin's bass tone is treble-heavy and therefore works as something of a hybrid between guitar and bass—the determined low frequencies working as a bass and the percussive faculties representing the guitar. The opener, "Cloud Space Earth," starts out with some tightly intertwined rhythmic accents by all involved and demonstrates a melodiousness that is neglected as quickly as it is introduced, when ambient electronic scratches and percussive cymbals take the trio down darker alleys. The finale sees the three finding their way back to harmonic unity and shines a special light on Hannaford's dry yet gripping piano runs in eights.

A monotonousness dominates the title cut, emanating from minimal drum work combined with steady and barely chordal piano playing which seems to take on the role of a metronome. The bass is the sole instrument that slowly glides through the measures and frequencies—its few notes and restrained pace creating a heavy atmosphere which is picked up by "Dark Horse" and carried through slightly dissonant improvisations to meticulously arranged and driven sections.

Each tune here shows a tendency towards disaster that is contrastingly paired with tight compositional ground work. The trio finally explodes in dissonance on "Maple and Bone" while "Moon Crab" displays their most deconstructed approach to improvisation, before "Hammer Gut" closes the album at its most swinging—actual walking bass lines making a prominent appearance; the German interpretation of the title adds up to something like "super good" and might be more applicable for this music—far from any reference to intestines.

Amen is filled with a variety of layers and sees a bassist doing things a little bit different from anyone else. Accompanied by equally curious and talented musicians, Franklin has created a very gripping record which radiates intrigue and an appetite for breaking boundaries.