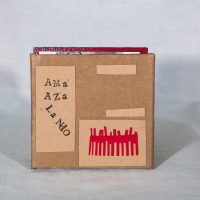 Music seems to be a matter of play as much as craft for Alejandro Vargas Rodriguez. The Cuban (now Spain-based) pianist shows plenty of chops throughout this whole recording, but they're often equalled or surpassed by the spirit of almost childlike joy that runs through it, as evidenced by the freeform playfulness of the track titles. (The title AMa AZa LaNdO, for example, is itself a playful anagram of "A Mano Alzada"—meaning something that's done freehand.) The piano work is exuberant in blurring lines between Latin jazz and experimentalism, also making use of bells and other noise in whatever sound-shaping way comes to mind. It's a blend that somehow comes out equal parts virtuosic and whimsical.

The prime free-jazz streak means it's not an album for everyone, but his in-the-moment excitement generally makes for sprightly melodies more than ponderous self-indulgence. Any meandering and vamping is spiced up with either a steady pulse or jittery restlessness; in either case it's usually lively and energetic enough to carry things along. Whenever his main keyboard line tends toward drifting, Vargas is likely to overdub an extra part or two to add a different flavor—airy fluttering flute, occasional percussive knocks or perhaps offhandedly vocalizing low enough that you'd have to listen closely to hear it.

It's hard to tell how much of this music is composed or improvised. From jaunty melodies to quiet meditations or crashing cascades, the piano motifs are abstract enough that they could be either one—which probably tells us it doesn't matter anyway and the results are what's important. Often that means a pretty skewed approach to chording, but then it's interspersed with spots like the pretty harmonic "NOodA" or the very Monk-esque "OdO" that don't require any particular taste for the avant-garde. In both cases it comes from a willingness to wander over the canvas without worrying about any rules, and the results are always straight from the hands and heart.