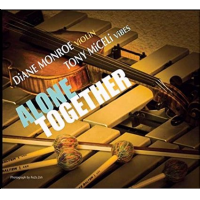 Violinist Diane Monroe and vibraphonist Tony Miceli have been working together in various contexts for about three decades, but that doesn't mean they had instant comfort with the idea of working as a duo. When they first visited the idea in 2009, both Monroe and Miceli were a bit apprehensive. Regardless, they decided to move past their fears and move forward with the partnership. They spent time honing their sound together, finally presenting that sound to the public via live webcasts from Miceli's basement in 2010. Now, with the engrossing Alone Together, they move from the basement to the marketplace.

Over the course of thirteen tracks, Monroe and Miceli cover an incredibly broad range of music. They tap into everything from spirituals to standards, cover country and classically-infused ground, plant their flag(s) in Spanish soil, deliver original works, and make their way through a pair of Thelonious Monk tunes—"Eronel" and "Misterioso." Through it all, it's their sonic bond, sixth sense connectivity, and musical taste that help to make a hodgepodge of music into a cohesive and captivating program.

The title of the album, derived from the oft-covered Arthur Schwartz classic that finds its way into this program, speaks volumes about the way this pair works. Neither player looks toward the other with a sense of detachment, but they also don't feel the need to deliver lockstep creations. Individual expression and rapport both have their place on this album. Soloist and support roles are established and played out to their fullest in many places, demonstrated most clearly, perhaps, on the title track, where Monroe supports Miceli with gentle comping and an arco bass line, and Miceli follows suit by laying a harmonic foundation beneath Monroe. But this pair is anything but predictable in the way they approach this music. Note Monroe's brief cuica-turned-cajon imitation(s) behind Miceli during "Spain," her tempestuous solo take on "Wade (In The Water)," a brilliant, eerie and groovy interpretation of "Misterioso," and a surprisingly vibrant, album-ending take on the "Theme From Star Trek." Monroe and Miceli needn't have worried about working alone together. This album shows that each one of them is a perfect match for the other.

Icarus; Vince Guaraldi; Spain; Fleetin' Blues; East Of The Sun (And West Of The Moon); Bachianas Brasileiras no. 5; Tennessee Waltz; Here's That Rainy Day; Wade (In The Water); Eronel; Alone Together; Misterioso; Theme From Star Trek.