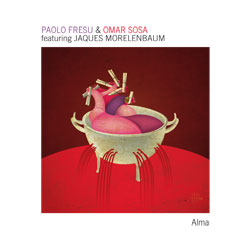 Trying to keep pace with the musical projects of pianist Omar Sosa or trumpeter Paolo Fresu is an almost-athletic pursuit. Calling either man prolific is an understatement, but what's more impressive than the quantity of music they release is the quality of their output. Both have tapped into an eternal wellspring of creativity that eludes most artists, with an ability to conjure the spirits of sound at will.

Their first encounter dates back to 2006, when Sosa asked Fresu to come aboard for a performance which resulted in Promise (Skip, 2007)—a live recording featuring Sosa's quartet, Fresu, and Cuban flautist Leandro Saint-Hill. Two years later, the pair toured Italy together and the experience deepened their musical bond, sealing the deal on their intentions to record a duo date. Alma is a worldly mix of music that finds balance between Fresu's modern European slant on Miles Davis-style moodiness and Sosa's inimitable explorations of the Afro-Latin Diaspora.

The majority of the music is fairly low-key in terms of propulsion, but high on emotional content. The use of percussion and electronic fringe in certain places—along with the occasional presence of cellist Jaques Morelenbaum, who served as the arranger on Sosa's Ceremony (Otá, 2010))—gives the project a sense of depth and variety, but this union of two spiritually-connected musical souls would have been enough to make magic, had this simply been a naked piano/trumpet recording.

While Sosa serves as the primary compositional force on the album, two of Fresu's three contributions—the uplifting "S'lnguldu" and the gentle "Rimanere Grande!"—bookend the proceedings. The most stirring material in the middle is a triumvirate of consecutive Sosa compositions. Morelenbaum, Fresu and Sosa create a heavenly blend on the peaceful title track, which starts in a serene place and arrives at a firm Latin space, while balancing somber and stately moods on ""Crepuscolo." "Angustia," a duo number that appears in between, proves to be the most intense and excitable song on the album.

The pair proves to be simpatico in performance, but the two co-written numbers don't highlight this connection and are the album's weakest tracks, with "No Trance" sounding like an outgrowth of Miles Davis' least-interesting '80s experiments and "Medley Part I: Niños" not really going anywhere. Still, the rest of the material is pure magic. Each man brings something different and special to the others written material, and their shared reworking of Paul Simon's "Under African Skies" is sublime, coming off like an aural imagining of a meeting between Davis, Bobby McFerrin, Jacqueline du Pré and Abdullah Ibrahim.

While it's fairly likely that both men have moved on to points unknown by now, with Alma they have created a work of art of full of life, love and soul. This is music worth savoring.