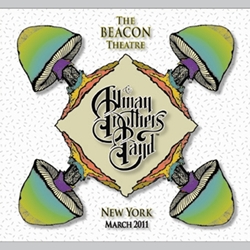 The past number of years Phish and Gov't Mule have both made it a point to perform classic rock albums in their entirety during their respective Halloween concerts. Last year saw Phish covering Little Feat's Waiting for Columbus (Warner Bros., 1978) and Gov't Mule covering The Who's Who's Next (Polydor, 1971). From the perspective of nostalgic late-baby-boomers, these are nice tributes by younger bands to older bands that provide at least a whiff of youth when such music was new. The market for 1970s rock music remains vibrant. A band whose music music should be of interest would have to be the Allman Brothers Band.

March 1971 hosted a now famous series of performances by the Allman Brothers Band at Bill Graham's Fillmore East in New York City that resulted in the band's third release on Capricorn Records, At Fillmore East (1971). Considered by many the finest live rock album, At Fillmore East stands as an icon of 1970s music making with few, if any, peers.

Trey Anastasio and Warren Haynes certainly had their eye on this recording for one of their Halloween Shows. Fortunately, the 40th Anniversary of the album's release fell during the Allman Brothers Band's lengthy residency at New York City's Beacon Theater in the spring of 2011. On March 12, the band recreated its original American two-LP release in order and in its entirety, complete with the recorded voice of Duane Allman informing the audience that the band was recording its third album, followed by the very familiar recording of Bill Graham's original introduction. A very alive and contemporary Gregg Allman counts down from four, kicking off a spirited and often ferocious reprise of At Fillmore East.

The current incarnation of the Allman Brother Band is a very different one from that which recorded in March 1971. Gregg Allman, Jai Johnny Johnson and Butch Trucks are the only remaining members of the original sextet. Guitarists Warren Haynes and Derek Trucks are quite different guitar players than the original Duane Allman and Dickey Betts. The two current guitarists are technically better (Trucks by light years) but both retain the grit of the original pair. Both Haynes and Trucks are superb slide guitarists who added additions to the house that Duane built.

The difference in slide styles is illustrated by comparing "Statesboro Blues" (where trucks plays slide guitar) to "Done Somebody Wrong" (where Haynes plays slide). Trucks throws off sparks of plutonium, inhaling and exhaling like a fire-breathing dragon, ideas developing so fast to cause whiplash. Haynes reverently plays things closer to the original while never losing grasp of himself. His slide style is solid with dense momentum filling all spaces. Trucks is spiritually fueled, pushing with critical centripetal force to maximum status.

Meanwhile, Gregg Allman is in better voice than in many years. Singing with solid conviction and soul, Allman tears into "Statesboro" and "Stormy Monday" with equal draws of brio and angst. The singer refuses to lose a beat in the lengthy "You Don't Love Me" and the succinct "Trouble No More," which also furnishes the best guitar interplay this side of a scorching "In Memory of Elizabeth Reed." Allman sings his best on the touchstone "Whipping Post," where he draws as much fire as 40years prior. Oteil Burbridge lays down the purposeful tempo, rock hard and driving, establishing the terra firma upon which Allman walks.

Taken as a single unit, the Fillmore East portion of this show is near perfect. The lengthiest songs are tightened up with no loss of excitement or creativity and the segue from "You Don't Live Me" into "Hot Lanta" is a nice touch. But, it is an anticlimax, as the concert contains the same amount of music after the reprise and the band just doesn't have the jam to carry it to the end. "Trouble No More" and "Every Hungry Woman" can be justified, but a dirge like "Good Morning Little School Girl" and a largely underfueled "The Sky is Crying" (underfueled in Allman's singing, the guitarists, for their part melt everything in their path) is harder. Still, all things considered, this was a fine reprise of a famous show.