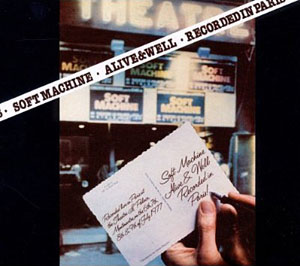 Despite the controversy that plagued the ever-shifting musical persona of Soft Machine during its 15-year run, the benefits of time and hindsight have largely proven the value of every incarnation—albeit best assessed independently, rather than as part of a single continuum. 1978's Alive & Well: Recorded in Paris was the last of a three-record run on Harvest, and saw Soft Machine leave all vestiges of its roots behind, as its last remaining founder, keyboardist Mike Ratledge, finally disappeared entirely, by the time the group played three nights in Paris, in July of 1977.

It was a curious record. Its original 30 minutes of live music were as strong—if not stronger—than 1976's Softs, but Jenkins' Giorgio Moroder-informed closer, "Soft Space," made little sense. A disco-fied piece of dance floor fluff—constructed with sequencers, synths and early drum machines—this solo studio confection was a dreadful way to end what was, at the time, thought to be Soft Machine's swan song. Esoteric's inclusion of the 1978 "Soft Space" single in its expanded and remastered Alive & Well is for completists only, and ends the second disc with a similar whimper. But it's the powerful 46 minutes of bonus material, from the Paris dates, along with significantly improved sound on the original album, that make this Alive & Well the definitive edition.

By this time, latter-day bassist Roy Babbington was also gone, replaced by Steve Cook, but it was the recruitment of violinist Ric Sanders that gave Alive & Well its distinct complexion. Jenkins' horns had been shelved completely, in favor of keyboards, following 1975's Bundles; with the departure of Softs' relatively innocuous Alan Wakeman, the group went hornless for the first time since Volume One (Probe, 1968). Sanders proves capable but, compared to contemporaries like Zbigniew Seifert, Jerry Goodman and Jean-Luc Ponty, a tad too considered, leaving Alive & Well}'s real fire to the interaction between guitarist John Etheridge and drummer John Marshall, who kick serious ass with reckless abandon on their second-disc duet, "Two Down."

Only "The Nodder" is reprised from the original set, and this bonus version finds Etheridge taking a little more time to turn up the heat over Jenkins' shifting-metered riff, though Marshall's performance boils over from the moment the solo section starts. That the original Alive & Well constituted all-new material doesn't mean Soft Machine was leaving its past behind, either, with versions of Softs' balladic "Song of Aeolus" and incendiary "Tale of Taliesen" proving, in particular, that Etheridge was far more than just a light-speed replacement for Bundles' legend-in-the-making, Allan Holdsworth.

If Esoteric's double-disc Alive & Well: Recorded in Paris demonstrates anything, it's that the visceral Etheridge has, for too long, been unjustly assigned secondary status, and this final touring edition of Soft Machine, unfairly overlooked. It's no surprise that Etheridge and Marshall have rediscovered gold as part of Soft Machine Legacy in recent years, because it's their collective firepower that makes this welcome, expanded Alive & Well well worth revisiting, even if most will choose to exclude "Soft Space" from their iTunes playlists.