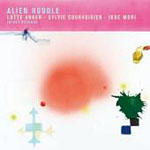 There is something palpably happening in this program of improvisation which lends it distinction. In this trio of reeds, piano, and electronics it's not by any means the latter that is what might be called the rogue element. Instead the coalescence of the music as well as its frenetic moments provide its considerable substance. There's no doubt that this is music happening in real time, but the means by which it reaches that status are veiled, enticing in their very intangibility.

"Night Owl" perhaps best exemplifies this, not least because of the degree to which the music is shaded, impermissible of glare. The trio's momentum is governed by stealth and topped out by Anker's long tones on alto sax, while Courvoisier and Mori go to work on the details of trialogue, ensuring that any dogmatic quality the music might possess is the result of thought and contemplation.

Such rarefied realization is also a mark of "Dancing Rooster Comp," where an underlying motivation momentarily appears to be the undermining of tonality before the music enters a half-territory through which Cecil Taylor might previously have passed. Even if that is so, Sylvie Courvoisier's approach to the keyboard is less rhetorical by comparison, and she delights in reducing its tonality, working a minimal seam.

"Whistling Swan" strikes a different balance between acoustic and electric, with Anker's soprano sax vocabulary the opposite of expansionist in the face of Mori's sound threads, many seemingly conjured out of nothing save the air, and Courvoisier utilizing the piano's extended possibilities with the aim of undermining the silence in mind.

There's also music of expansive gesture here. Anker and Courvoisier engage in dialog as close to free jazz as anything here on "Crow and Raven." The feeling is rendered only more clearly when the following "Blackbird" emphasizes the alien of the disc's title. Music is again summoned up out of nothing, the passing moments marked in steps both faltering and purposeful at the same time. It's music worthy of deep listening, which is true of the entire program. Leaving the everyday, even as it rewards the effort of doing so, the profundity of the moment also reaches exalted status, making for music that's urgently alive even while it's shot through with contemplation.