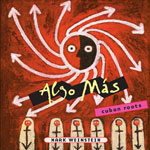 This unique recording has an uplifting spirit that blends traditonal Afro-Cuban clave rhythms and vocals with elements of jazz, rock, contemporary dance, and world music. Not to sound overly descriptive, but this music is thick with Old and New World persona; to those familiar with New York-based flautist Mark Weinstein, this should come as no surprise. His impressive resume is dotted with names like Thad Jones, Eddie Palmieri, and Tito Puente, as well as many recent recordings and the landmark 1967 Cuban Roots. After these many years Weinstein is still tapping into the flow of creativity, as vibrantly as ever on Algo Más (Something More).

The music's richness and diversity is elevated by Weinsten and the perfect ensemble of musicians. The leader's voice is fertile with jazz roots as he commands and delivers smooth notes using a variety of harmonics from his set of soprano, alto, and bass flutes. Given life by the pulse of a dynamic multi-rhythm section including bassist Santi Debriano and three percussionists (Gene Golden, Nani Santiago, and "Bringuito Burney), the music beckons the listener to get up and dance.

And this is not your typical Latin or Cuban jazz recording, as it borrows heavily from traditional street and spiritual influences, beginning with "Ellegua Abierto (Open Ellegua), which is layered with mellow guitar, voice chants, percussion, and flute solos. The music exudes a feeling of joy and optimism on "Aguas de Ochún (Ochún's Waters) with a tempo ported by soothing flute, percussion, and engaging vocals.

There is so much to enjoy on this recording. Noteworthy pieces include the spellbinding dance of "Vientos de Oyá (Winds of Oyá), the percussion/guitar outpouring of "Jete Dlo (First Water), the calming "Salud Asojano (Health Asojano), and the closing title song, which highlights free solos from Weinstein and Bourelly, making Algo Más one of this year's most memorable releases.