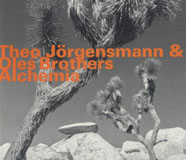 Clarinetist Theo Jorgensmann's Alchemia is the third Hat Hut release in a row in which a free improvising, progressive musician has woven overt and telling references to past glories of the jazz tradition into his own, singular style.

Cellist Daniel Levin's Blurry (Hat Hut, 2007) evoked the chamber jazz of the 1950s and 1960s on an otherwise mostly sui generis disc, while pianist Steve Lantner's What You Can Throw (Hat Hut, 2008) summoned up the shades of keyboard auteurs James P. Johnston, Thelonious Monk, Bud Powell and Sonny Clark on another essentially future-looking set. The music of both leaders was enriched and made more widely accessible in the process, and Jorgensmann's disc benefits in similar fashion.

Jorgensmann's historical focus on Alchemia is perhaps the broadest of the three, embracing, as it does, practically the entire jazz tradition: it's the clarinetist's affirmation of what he calls "the fourth dimension of time in music (they call it swing)." Jorgensmann grasps his instrument with firm hands, a full throated embouchure and a big pair of lungs, stays on mic for most of the disc's fifty-eight minute playing time, and occasional pastoral interludes aside, delivers a torrent of hard-driving music which swings like the proverbial clappers.

Past clarinet masters like Artie Shaw, Woody Herman and Benny Goodman pass to and fro in front of the listener's ears, apparent not so much in Jorgensmann's notes as in his exultant, driving sense of swing. It's exhilarating, seat-of-the-pants stuff.

Recorded live, with great sound, at Klub Alchemia in Cracow, Poland in 2006, Alchemia follows Jorgensmann's debut with the bass and drums team of Marcin and Bartlomiej Brat Oles, Miniatures (Not Two, 2003). The Oles brothers excel on the muscular, tumbling music which dominates the set. During the second half of the nineteen-minute "Menace" they achieve a degree of primal, beat-centric intensity which approaches that of heavy metal rock; over this, Jorgensmann's clarinet wails and charges, putting one in mind of Roland Kirk's bigger and more abrasive horns, with Kirk's attack on drummer Roy Haynes' magnificent Out Of The Afternoon (Impulse!, 1962) particularly resonant.

Aside from the gentler "Perrata" and "Giuffree," this is the atmosphere which characterizes Alchemia, and it's a chariot ride which will have you revelling at the wind in your hair and the fast-forward fly-by of the scenery.