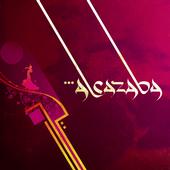 As Stan Laurel or Oliver Hardy famously said: "Another fine mess you got me into." A fine and wonderful mess, that is. Alcazaba is a London-based group of acoustic musicians who are exploring the mélange of styles which make up the Andalusian Gypsy music, flamenco. Spain's guitar music, India's folk and ritual music, and the Maghreb's, mainly but not exclusively Arab, court music tradition. In flamenco, and indeed in much traditional non-Gypsy Spanish music, the points where these styles meet and interact are indistinct, fuzzy, well nigh impossible to isolate with precision. A fine and intoxicating mess, sweet confusion under the moonlight.

Alcazaba is Andalusian guitarist Ramon Ruiz, Arabic oud player Attab Haddad, and bansuri (Indian bamboo flute) player Teymour Housego, brought up in New Delhi, where he learned his instrument in the traditional fashion, at the feet of his guru. The three met by chance in London in 2005 and with percussionist Genevieve Wilkins formed Alcazaba. Flamenco singer Eva Pinero Mesa joins the group on most tracks. This is their first album.

You won't find much cante jondo—the "deep song," the Gypsy blues, which is the heart and soul of flamenco—on Alcazaba, although one track, "Taxim Seguirillas Part One" gets close. Instead the music, led by the counter-pointing or dueling flamenco guitar and oud, inhabits a generally sunny territory, moving into passages of greater urgency often enough to keep things fresh. Most of the tracks were written singly or together by Ruiz and Haddad. Housego, whose flutes play a more supportive role, wrote two tunes, "Himalaya," which after a theme vividly redolent of India gives way to an intense Maghrebi oud solo, and "Temptation," the disc's upbeat and dramatic closer.

The album isn't a deconstruction of flamenco, Indian or Maghrebi musics, but a vibrant, youthful recalibration. Less culturally wide ranging than that of the superb Barcelona collective Ojos de Brujo (Warner Bros., 2009), with its amplified, dancehall lashings of rap, jazz and Cuban styles. More like an equal meeting of, and concourse between, Gypsy flamenco and Maghrebi oud music, colored by the bansuri. It's virtuosic and has character. Melodies are strong, rhythms are infectious, and improvisation, individual and collective, flows freely and with spirit. It could perhaps do with some more weight in the drums, palmas (handclaps) and jaleos (codified vocal exhortations), but that's no obstacle to enjoying the album. Alcazaba is a delight and Alcazaba, it is to be hoped, will continue its journey.