The Planet of Eternal Life 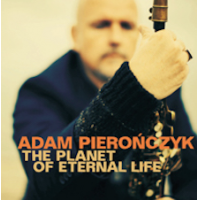 This album is a rarity on a world scale, while also being the first recording of its kind in Poland, as it consists only and exclusively of saxophone – and this is soprano, commonly regarded as the most difficult of this family of instruments to master. Sixty minutes of music, recorded in the extraordinary location of the 14th-century Gothic ruins found in the German city of Peitz. The fifteen pieces are mostly new compositions by Adam Pieronczyk, but there are two standards to be found on the album as well: John Coltrane's “Giant Steps”, and Ray Noble's “Cherokee”. A beautiful sound, a magical place, simple melodies, as well as complex excursions of a type not often heard, generally exploring the inaccessible upper registers of this demanding instrument.

Help improve the The Planet of Eternal Life page

All About Jazz musician pages are maintained by musicians, publicists and trusted members like you. Interested? Tell us why you would like to improve the The Planet of Eternal Life musician page.