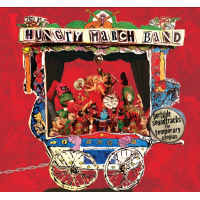 Brass band music with punk attitude, appropriate for dancing, rioting, getting married, or quitting one's job. - The fourth album from the Hungry March Band is a 13-track manifesto of the brass band as social utopia.

What are the mathematics of paradise? What algorithm, when followed to excess, is guaranteed to produce not just astonishment, but an existential division of Before and After? Or, even trickier, what magic combination will lift the moment out of its ordinary context just long enough to make the wedding stick, or bury the old friend, or change the attitude at a demonstration, and meanwhile always seduce the audience? Surely one such algorithm involves a bunch of horns and drums pounding out a set of vibrations so complicated, yet so catchy, that a guarantee of total transformation is not only possible, but unavoidable!

This may sound like a tall claim, but it is the only reasonable explanation for why the Hungry March Band remains in constant demand on their home turf in New York City, a place where every nook and corner already resonates with the machinations of symbolic capital. The marvelous inefficiency of the Brass Band, and the studied surrealism of the Hungry March Band in particular, are a secret tool for the production of momentary paradise, perfectly captured in Portable Soundtracks for Temporary Utopias.

All About Jazz musician pages are maintained by musicians, publicists and trusted members like you. Interested? Tell us why you would like to improve the Portable Soundtracks for Temporary Utopias musician page.