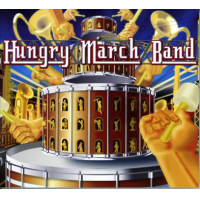 Produced by the Hungry March Band and Jason Candler, Critical Brass was recorded in June of 2004, days after the 25-member project returned from its first European tour. Recorded at Loho Studios on Manhattan's Lower East Side, Critical Brass features the splendid artwork of Williamsburg artist Troy Frantz.

Formed in 1997, the Hungry March Band is a socially active, community-based musical performing group. The HMB appears regularly throughout New York City, toured Europe in 2004 and has recently returned from a successful New Orleans Mardi Gras tour. A second European tour is scheduled for summer 2005.

Hungry March Band's vibrations of brass, flesh, blood and wood create a blazing entity like none other!

All About Jazz musician pages are maintained by musicians, publicists and trusted members like you. Interested? Tell us why you would like to improve the Critical Brass musician page.