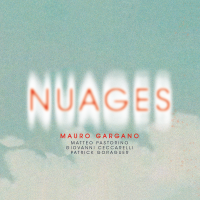 The music on this record was composed and collected according to a sentimental logic that is not at all rational, but with symbolic points of contact. This project represents for me a kind “Epiphany of feelings”, in which childhood memories appear with open books, songs listened to, geographic locations, places and feelings experienced difficult to describe and define. The parts were composed in a timeline that spans the past seven years and synthesizes most of the musical forms that have always fascinated me but that I have not been able to express in music for different reasons. The expressiveness of Domenico Modugno, the music of the municipal harmonies of my native region (Puglia), the music of Nino Rota, Ennio Morricone, John Coltrane, Duke Ellington, the contemporary music, blues, Brazilian music, minimalism, Neapolitan baroque music, Django, the music of Paul Bley, Keith Jarrett, Bobo Stenson and Jan Garbarek… Stylistic universes different that I try to make coexist by deconstructing them. The choice of an ensemble with clarinet, piano, double bass and drums seemed to me the most suitable for this project. The clarinet is a classical instrument widely used in the harmonies of southern Italy (the band municipali), but also widely used in popular music in many countries, from tarantella to the music of the Balkans, from Brazilian choro to klezmer, and of course jazz. Its sound, its timbre and its large melodic register have always fascinated me and I was convinced that it would be more to its instead of a saxophone or a trumpet for this music. The repertoire consists of nine compositions and two covers, one by Pierpaolo Pasolini and Domenico Modugno “Che cosa sono the Nuvole?” and “Nuages” by Django Reinhardt. The musicians of the project, with whom I share the same artistic and human musical intentions are Matteo Pastorino on clarinet, the pianist Giovanni Ceccarelli and drummer Patrick Goraguer.

All About Jazz musician pages are maintained by musicians, publicists and trusted members like you. Interested? Tell us why you would like to improve the Nuages musician page.