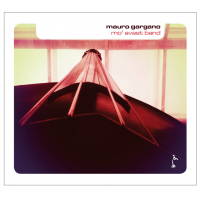 There are signs that never fail. The elegance of the phrasing, the warm and woody sound, the rhythmic rigor, the ability to create climates. For a while now we have been following with interest the wanderings of Mauro Gargano, until now a talented accompanist many times seen alongside artists who, themselves, are not mistaken. It was in 2009 that he decided to bring together in the studio some of the most exciting musicians of the moment to take a new step and record his first album as a leader. After two years and some tribulations, the album is finally available. Finally, he unveils nine compositions and two magnificent covers. Simple beauty of the themes, intelligence of the arrangements, fluidity of the exchanges, musicality of the soloists ... It is fine to focus on an instrument or a cell (rhythm section, blowers), it is always the overall sound of the group that prevails, flexible and robust, in perfect balance. Like a good leader, the double bass player distributes the roles while ensuring an unshakable base. This in particular allows Fabrice Moreau to give free rein to his elusive drumming of calculated minimalism, which knows how to transform when necessary into powerful energy. Constantly on a thread, protean, the latter plays with the rhythm, going so far as to sacrifice it to silence the better to catch up with it and carry it via a powerful strike with an eminently coloristic rendering. Everything that contributes to making Stéphane Moreau a unique drummer is highlighted here by the repertoire: his way of making his drums sound in a thousand and one ways, of considering cymbals, toms and snare drums as elements likely to register. within the same phrase, his detached art of punctuating the speech of other musicians more than the actual tempo… Unpredictable and unique, his pulsation seems to dance like a wisp around the solid bass lines. Mauro Gargano also demonstrates an interesting relationship with space. It can, depending on the song and the density it wishes to give it, occupy all the space (see its full parts on "Bass 'A' Line" or "Apulia") or on the contrary be satisfied with airy patterns (the throbbing riff and the floating chords of “1903”, on which he performs a moving and beautiful bow solo, a sublime rhythmic section in the balance between pulsation and narration. It is with confidence and generosity that Stéphane Mercier and Francesco Bearzatti propel the quartet into the high spheres of framed improvisation by exploiting the melodic material that we owe to the very open writing of the themes. Nervous phrase, perfect control of the tones… Mercier, perhaps the least known member of the group in France (may this record repair this injustice), is the type to make the powder speak. He pulls long sentences (nice matte tone) out of his alto sax that make sense, plays "inside" and rings his notes, unlike that rascal Bearzatti! As brilliant as he is disobedient, he plays a lot "outside" but also knows how to show sensitivity ("Ostersund", "Respiro Del Passato"). However, her natural tendency is to go far and fast. Never where you would expect, he succeeds in "dirtying" the music without ever altering its musicality. There is no need for either side to erase their (marked) features to find common ground. They remind us here that adaptation to others is achieved by listening, accepting and sharing, and not by eroding each other's specificities. Thus freshness, envy and madness combine with consistency and unity in a breathtaking and enjoyable dialogue. On two titles, Bruno Angelini joins the team bringing his keen sense of harmonic colors. Imbued with lyricism and delicately rugged, his playing, which blends accompaniments, solos and counter songs, logically fits into the aesthetic of the group, of which he knows the members well. both on a rather lunar "Mars" which leaves plenty of room for its dreamy piano, and on a sunnier "Apulia" with the appetizing scent of Italy, it contributes to the overall richness of the record. We instinctively feel that certain albums will accompany us for a long time. Mo’Avast, a source of pleasure that never seems to want to dry up, is undoubtedly one of them. We come back with an intact enthusiasm to taste the combined musicality of five artists who know, among themselves and with us, how to place music under the sign of sharing.

All About Jazz musician pages are maintained by musicians, publicists and trusted members like you. Interested? Tell us why you would like to improve the Mo' Avast Band musician page.