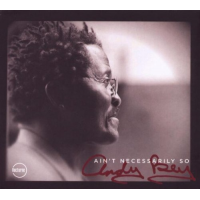 Andy Bey is the finest male jazz vocalist performing today. This may stick a finger in the eye of such talent as Kurt Elling or Mark Murphy, both contemporaries chronologically opposed; but both of these artists readily acknowledge the immense talent of Bey.

He is no young lion exploding out of the woods from the dark. Bey has been performing since the mid-1960s when he debuted with Now, Hear (Prestige, 1964). He recorded sporadically through 1970, when he released Experience and Judgment and then, apparently took twenty years off from recording.

Stepping forward to 1991, Bey began a collaboration with composer/producer Herb Jordan that first manifested as 1996's Ballads, Blues and Bey (Evidence). Since then Bey and Jordan have collaborated on several more recordings including Ain't Necessarily So which was recorded May 13-15, 1997 at Birdland in New York City. Amazingly, this recording was Bey's first live performance as a leader in his own right. Listening to this release makes this fact almost unbelievable.

Bey's vocal and pianistic abilities may best be compared with those of the late Shirley Horn on any number of levels. Both possess sharply distinctive vocal and piano styles that could easily be identified from a light year away. Both singers have an affinity for ballads played slowly, constructed with plenty of silent space.

The first thing to strike the listener is the care and deliberation with which Bey counts off the tempo of his songs. The opening of "Ain't Necessarily So is marked off with finger-snap and vocal metronomic precision, introducing a simple yet compelling piano figure.

Bey's singing style is every bit as distinctive as the previously mentioned Horn. His accent or lack thereof, makes his voice universal in its intonation and friendly in its reception. Bey more thoroughly possesses the Great American Songbook than any of his contemporaries, and does so with greater fervor. Bey's delight in precise tempo is dramatically juxtaposed between upbeat and ballad pacing with the disc's final songs, "Brother Can You Spare Me a Dime, and "Someone to Watch Over Me.

On "Brother, Bey counts off a medium fast tempo and sings with the full gusto and virility his dynamic vocal range is capable of. He turns this blues into an upbeat, balladic showtune. Finishing the disc, Bey pays special tribute to the late Sarah Vaughan with an ultra-slow and absolutely perfect performance of "Someone to Watch Over Me as he abandons the almost guttural plea of "Brother, replacing it with pure sweetness and light. This is the first truly perfect disc I have heard this year.

Intro; Ain't Necessarily So; Hey, Love; All the Things You Are; I Let A Song Go Out of My Heart; If I Should Lose You; On Second Thought; Brother, Can You Spare A Dime?; Someone to Watch over Me.