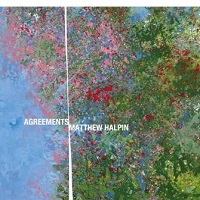 Irish tenor saxophonist Matthew Halpin has waited for his moment to strike with his debut CD as leader, having graduated from Berklee College of Music as long ago as 2013. Not that he has been coasting; since relocating to Germany, Halpin has recorded with The Owl Ones and Last Chance Dance, just two of half-a-dozen ongoing projects at the cutting edge of contemporary music. On Agreements Halpin surrounds himself with some of his closest collaborators from his various groups, to deliver eleven original compositions which veer between straight-ahead jazz, abstract sonorities and...a cappella dreamscapes.

On the driving "Dancing with the Devil," propelled by drummer Sean Carpio's bustling rhythms, there are snappy solos from Halpin and Downes, underpinned by guitarist Hanno Busch's fuzz-toned grunge. Old-school tenor warmth imbues Halpin's playing on "Dog Day Afternoon," a lazy blues of sultry hues. Likewise, on the rhythmically dense "The Beach," Halpin's lyricism plants at least one of his feet in a post-bop tradition which hints at Joe Lovano's influence. Atmospherics also play an important role, as pockets of echo-tinged tenor and Busch's slightly distorted tone attest on the powerful "Swings and Roundabouts."

The group is arguably at its most persuasive on uncluttered straight-ahead fare such as the boppish "Awkward Handshakes" and the burning, John Scofield-esque "Pop Fiction." On the latter, saxophonist and guitarist ride in tandem on the head, with Busch's precise yet biting solo displaying none of the frayed edges he purveys elsewhere. By way of contrast, the sub three-minute "Treetown" pitches Halpin with Carpio and percussionist Sergio Martinez in a hypnotic duel of tenor minimalism and dancing Afro-Caribbean groove. No less personal in stamp is "Sigh for Sam," an enveloping meditation of dream- like qualities founded on Carpio's heart-beat bass drum pulse.

Just as the album begins on a boldly risqué footing, so too, Halpin gently crowns his debut with "Sleep," his most left-field composition. This ethereal a cappella lullaby of poetic construction—harmonized for three voices—dovetails with Halpin's softly rendered phrasing, shimmering organ and guitar textures, and metallic punctuation as fleeting as shooting stars.

Constantly engaging and not infrequently surprising, Agreements is a highly satisfying debut which draws from past tradition while keeping an eye fixed firmly on the horizon. On this evidence, Halpin's trajectory will be one to follow, for sure.