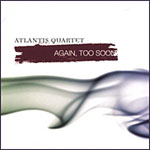 The compositional intensity found in the Minneapolis-based Atlantis Quartet's live performances in and around the Twin Cities have garnered it with praise as being one of the bands to watch on the mid-western modern jazz scene. Minnesota-area critics and fans alike have dubbed the foursome as "the most exciting band in town" and their assessment is far from incorrect, as tenor saxophonist Brandon Wozniak, guitarist Zacc Harris, bassist Travis Schilling, and drummer Pete Hennig work their mojo like free-jazz connoisseurs on their 2007 debut, Again, Too Soon.

Wozniak's opener, "Meter Matrix," feels like an apt title, as Wozniak's frenzied tenor combines with the sound of his band mates in crescendo midway through, the timbre goes off the charts. On the Hennig-penned "The Crave," Wozniak's fiery improvisational work, coupled with Hennig's fluent soloing and Schilling's smoky bass-line, makes for a relaxing, but musically coherent jam session.

Likewise on Harris' "Light Rail" a tune that feels inspired by any number of songs from Miles in the Sky (Columbia, 1968), finds Harris' cool-handed guitar combined with Wozniak's light phrasing and Schilling's muted double-bass groove over Hennig's rhythmic groundwork to create an aura of musical textures that sound as fresh and relevant as they did in Miles Davis' heyday. Harris' airy strings and Wozniak's warm tonal expressions over Schilling's bebop era rhythms and Hennig's coolly executed tempo, make Schilling's celestial-sounding "Wanderlust" a wholly enjoyable listening experience.

On the closer, "The Cannonball," the Quartet steps it up a notch and shows its teeth with a biting, composition rooted in the spirit of early funk of inner-city origin, as Hennig's vehement percussion lays the foundation for Wozniak hot and heavy reed work, Schilling's dirty bass backdrop, and Harris' in-step guitar-slinging. The band plays like it means business, but retains a sense of musical sensitivity on the tune's breakdown.

On Again, Too Soon, it's abundantly clear that the Atlantis Quartet's star is on the rise as they're all talented songwriters, attacking their compositions with utmost earnestness. Yet, they play in a way that doesn't speak of business as usual; instead, they sound as if they're just having fun.