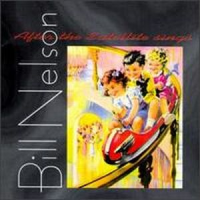 UK-based Esoteric/Cherry Red Records has reissued a number of Nelson's solo albums over the years, and After the Satellite Sings is among his finest recorded dates, signifying one of many albums where he performs as a multi-instrumentalist. Originally released in 1995, this production also reminds us that he was on the fast-track when embracing digital technology. In addition to drum programming, Nelson handles the vocals, keys and synths parts to great effect, often flavored by his manifold guitar phrasings.

Ultimately, it's a song-oriented endeavor. For example, on "Streamliner" his subdued and poetic vocals atop a mid-tempo groove infer notions that he's letting the listener in on a little secret, and "Zoom Sequence" tenders a quaint melody floating above a sturdy backbeat and enamored by a harmonious and catchy synth passage. Here, Nelson summons recollections of the 70s British Canterbury prog rock scene, triggered by his howling guitar solo and stately themes. Moreover, certain pieces integrate blithe balladry, world music percussion treatments, clipped narratives and vintage Brian Eno style dark ambience on "V-Ghost." The alluring outcomes of these 15-works vividly demonstrate Nelson's all-inclusive musicality and exhaustive imaginative powers, speckled with sporadic doses of fun and frolic.