By Matthew Warnock
July 9, 2009
Sign in to view read count 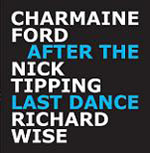 After the Last Dance is a hard-grooving, impressively creative release by New Zealand's Ford/Tipping/Wise Trio. While some people wouldn't think of New Zealand as being a hotbed for modern jazz, these three musicians are aiming to change that and bring to light the strong NZ jazz scene with this release. Each tune is thoughtfully composed and carefully arranged, the group is tight and feeding off of each other's energy, and the level of creativity is high during improvised solos and melodic interpretations.

Each of the nine tunes on the album was written by either Charmaine Ford or Nick Tipping, or as a collaboration between these two adept composers. Both musicians bring a strong melodic and harmonic sense to the tunes, but one of the most interesting elements is their penchant for writing in 3/4 time. Both Ford's "Eleven O'clock" and Tippings' "Folieta," are well-crafted tunes that take advantage of the rhythmic and compositional opportunities that 3/4 can offer a piano trio. Their use of rhythmic variation and phrasing brings to mind the classic piano trio recordings of the late, great Bill Evans, who also had a mastery of this time signature.

Apart from the strong compositions, the album also features very tasteful and highly energetic performances by all three of these talented musicians. Ford brings a strong sense of traditional rhythms and modern harmonic vocabulary to her solos, which provides a sense of the historical significance of the music alongside a feeling of her willingness to push the music forward into new and unexplored territory. Tipping and Wise are also at the top of their games as both compers and soloists. Tipping's solo on "Likewise" digs deep into the pocket while the bassist lays down a series of tasty, melodic riffs that are the perfect complement to the preceding melody section and the Latin groove interlude that follows.

After the Last Dance provides a glimpse into the musical lives of these three hard-working and talented musicians, as well as giving some well deserved exposure to the New Zealand jazz scene. The trio is tight, the tunes are creatively arranged and the improvisations are first rate, everything a piano trio album needs to be successful.