Sarah Vaughan: After Hours at the London House 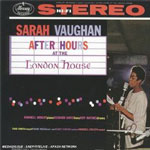 It's best not to assume you have this recording, even if you do. Vaughan recorded two albums entitled After Hours—one a 1961 Roulette session with bass and guitar accompaniment, the other this recently reissued 1958 Mercury recording featuring the legendary singer with her regular trio, joined by four guest musicians from the Count Basie band. Although not as well known, this latter recording is the better bet, if only because of the presence of Thad Jones and Frank Wess, along with a tight rhythm section anchored by Richard Davis and Roy Haynes.

Not that the Divine One needs extra help. Far too much has been made of her sumptuous tones and "incredible range," and to a great extent the gifted vocalist may have encouraged such a single-minded focus with the pyrotechnical, even coloratura displays characterizing her later performances. But it's on her recordings between 1954 and 1967 that Vaughan communicates most effectively.

Her sound is suggestive of a Charlie Parker or Clifford Brown, with the addition of a poetic text that she can deliver as intimately as a Billie Holiday. Although After Hours at the London House doesn't rank with either Sarah Vaughan with Clifford Brown (Verve, 1954) or At Mr. Kelly's (EmArcy, 1957), it belongs in the same select company with her other admired recording sessions.

Why this particular recording has fallen into critical disfavor and subsequent neglect is something of a mystery. Vaughan forgets the lyrics to (ironically) "Thanks for the Memories" and good-naturedly puts herself down, throwing in apologies. But with the exception of this last tune, the assured performer approaches a level of artistry few other singers would dare dream of. With the third song, "I'll String Along with You," she's in her special zone, and her irrepressible delight comes through at the end of the tune, when she practically giggles in satisfaction over her own performance.

The spell doesn't let up for the next three numbers—and the flubs on the finale practically come as a necessary relief, dispelling a relationship between artist and listener that's simply too close not to end. On this night the sublime singer can criticize herself for a few mental lapses because she can "afford" to, not because she's providing some overly literal reviewer with a write-up of the performance.

After 1967 Vaughan's voice would darken, taking on greater weight and maturity, acquiring a wider vibrato, and extending its range at both ends—but not without a pronounced falsetto break and forced upper register that turns off some listeners. Still, all fans of jazz singing should check out her mind-boggling scat performance on "Autumn Leaves" (Crazy and Mixed Up, Pablo, 1982). Vaughan was at her best when extemporaneously recomposing standards into fresh melodies that she made her own. As After Hours at the London House demonstrates, her transformation of a familiar song can readily become the listener's new standard as well.

Like Someone in Love; Detour Ahead; Three Little Words; I'll String Along With You; You'd Be So Nice to Come Home To; Speak Low; All of You; Thanks for the Memory.