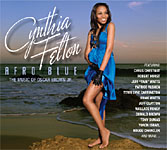 Oscar Brown Jr. (1926-2005) was a man of many talents and interests. Brown could count himself as a singer, songwriter, arranger, playwright, poet, and civil right activist with political proclivities. In jazz, Brown is best remembered for providing lyrics to many instrumental jazz standards, including Miles Davis' "All Blues" and Bobby Timmons' "Dat Dere."

Dr. Cynthia Felton is a woman of many talents and interests. Felton serves as the Artistic Director for The Ethnomusicology Library of American Heritage. She sports a Bachelor of Music Degree from Berklee, a Master of Arts from New York University, and a Doctorate in Jazz Studies from USC. While academically impressive, Felton is more impressive as a musician and arranger, as evidenced on her self-produced Afro Blue: The Music of Oscar Brown, Jr.

The intersection of these two artists produces a most satisfying result in Felton's interpretations of Brown's lyrics, while being musically supported by an all-star cast. Cyrus Chestnut, Robert Hurst, Jeff "Tain" Watts are only a few of the artists showing up for Felton's party for Oscar Brown.

Felton introduces Brown with a plaintive "Motherless Child," accompanied by Lesa Terry, who demonstrates the violin's ability to inject a humid peat organicity into jazz that recalls the part blues play in all American music. Mongo Santamaria's "Afro Blue," sensual as an instrumental, is heated up by Brown's lyrics and sent into orbit by Felton's sexy delivery.

But sex appeal is not all Felton or Brown have to offer. "But I Was Cool" and "Dat Dere" are two very playful songs that Felton delivers right on time. On the former, Felton proves the funny one, slinking her way through Brown's hilarious lyrics. Guitarist Ronald Muldrow sets a solid groove over which Felton purrs childlike about an elephant over "dere."

The disc's center piece is, of course, Nat Adderley's "Work Song," which Felton sings with the steamy resignation of doing time. "All Blues" is smoothly delivered by Felton, whose confidence and awareness cannot be questioned. Wallace Roney adds the cool to "All Blues" and Ernie Watts to "Afro Blue." Every year there are released many good jazz recordings, many fewer exceptional ones, and nearly no perfect ones. Afro Blue: The Music of Oscar Brown, Jr. escapes as one of the latter ones.