By Clifford Allen
January 19, 2009
Sign in to view read count 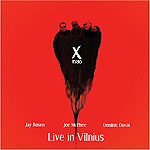 It's been a decade since Trio X—reedman and cornetist Joe McPhee, drummer Jay Rosen and bassist Dominic Duval—released their debut, Watermelon Suite (CIMP, 1999). Though all three members of the trio are among the busiest improvising composers on the planet, that fact does nothing to diminish the empathy on which each Trio X recording is based. Their 2006 US tour was recently documented in a lavish seven-disc boxed set on CIMPoL. In March of that year, they toured Eastern Europe and in addition to a DVD documentary on CIMP, The Train and the River (2007), their concert in Vilnius, Lithuania at Konresu Rumai now gets the double-LP treatment from Lithuania's No Business Records. Live in Vilnius features McPhee mostly on tenor, with a few brittle daubs of cornet for good measure, as the trio engages long-form renditions of standards, Monk and Ornette Coleman tunes, and compositions by members of the group.

Trio X is far more than power trio push-and-pull; rather, they extend the Gnostic "Y" of Albert Ayler's Spiritual Unity (ESP, 1964) into realms both historical and contemporary. On the closing "Blue Monk," McPhee purrs velvety and slick through the theme with touches of Coleman Hawkins and Gene Ammons, with Duval and Rosen providing a light and easy lope. Yet that Monkishness grows from a shattered display of metallic, split-tone peals and vocalizing through the horn, an eruption into muscular blowing over dry, snare-crack pulse. Husky, pathos-laden tenor fuels "Valentines in a Fog of War," part of a suite that opens the first side (including the solo bass composition "Visions of War"), earthy detail from Rosen's brushes a pattering accent on taut bass musculature and throaty, wide-vibrato lilt.

While Live in Vilnius is a vinyl-only production, housed in a deluxe gatefold sleeve and limited to 500 copies, it stands as a testament to Trio X's total commitment to drawing from a wealth of sources, not to mention physical and spiritual communication. With several documents now available of Trio X's 2006 tour, one can only hope they continue to build on experience and communion for another decade.

Visions of War; Valentines in a Fog of War; Going Home; Dance of Our Fathers; Lonely Woman; Law Years; Smiles for Samuel; The Basic Principles; Evidence; God Bless the Child; For Don Cherry; Memories of the Dream Book; In Our Own Sweet Way; My Soul Cries Out; Blue Monk.