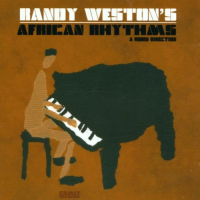 While most talented jazz players continue to evolve, very few enter into a revolution. That's what happened four decades ago with Randy Weston. Weston (b. 1926) made a series of recordings in the '50s, including a streak of early bop records on Riverside. His early association with Thelonious Monk obviously shaped his musical vocabulary, as did his tenure with Cecil Payne and Kenny Dorham. But it was in the next decade that Weston developed one of the most distinctive voices in jazz.

In the early '60s, Weston visited Nigeria. By the end of the decade, after a 14-country African tour, he spent several years in Morocco. These experiences forever changed his music. The recent reissue African Rhythms brilliantly documents how Weston managed to incorporate the traditional rhythms and idioms of West and North Africa into his jazz playing. The music on this disc was originally released on two 1969 Comet records, African Cookbook and Niles Little Big, both credited to Randy Weston's African Rhythms.

Recorded in Paris, the quintet incorporated players from France, Nigeria, and America—plus Weston's son Niles, after whom the standard "Little Niles" was named. (That particular tune appears here, on fire all the way.) The group represents the African diaspora directly with two conga players, and indirectly through a variety of rhythmic and thematic figures drawing from Caribbean as well as North and West African sources. By this point, Weston had come to fully appreciate the virtues of non-linear playing. His melodies, still based on chord changes, have an irregular phrasing and punctuation that distinguish them from his peers. They are distinctly unpolished. The fresh, bouncing energy of his improvisations integrates musical worlds in a way that seems inherently logical. (To amplify this point, Weston once said of his early mentor Monk, "He played like they must have played in Egypt 5000 years ago." Obviously that's a high compliment. Even Sun Ra might agree on that point.)

The original tune "Afro Black" stands as a high point on the record, bubbling over with funky energy, yet still dense enough to bear serious weight. The rhythms generated by drummer Art Taylor and conga players Niles Weston and Reebop Kwabu Baah serve as pure propulsion, regularly spilling over into the realm of conversation with the pianist. Weston's "Jajouka" pays obvious tribute to the relatively square North African style of drumming, sparsely overlaid with repeated brief themes that evolve over time.

The bottom line, whether or not you're interested in the multi-cultural aspects of Weston's music, is that African Rhythms is solid from start to finish. The pianist has a talent for drawing out the best in his bandmates, and his approach to these tunes—whether blues, standards, or originals—has a gentle, coaxing quality. Most importantly, the music is completely unassuming and unpretentious.