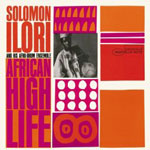 Every now and again, a label pulls a previously unissued session out of the vaults and it proves to be a down-by-law number one with a mango. Candid did it earlier in 2006 with Jamaican tenor saxophonist Wilton Gaynair's Africa Calling (London, 1960). Now it's Blue Note's turn with Solomon Ilori's African High Life (Englewood Cliffs, 1963-64)—or to be precise, the album's final three tracks, recorded eighteen months after the rest of the set, and which together clock up just under forty minutes of playing time.

The references to Africa in the two titles are purely coincidental. Gaynair's album was down-the-line, but massively on-fire and passionate hard bop. Tracks 7-9 on Ilori's album, on the other hand, anticipate—with great brio and deep grooves—the astral jazz of the late '60s and early '70s, and the world jazz which has in turn followed.

The Nigerian-born Ilori arrived in the US in the late '50s and recorded the first six tracks on this album—the original African High Life release—in 1963. They're pleasant, if unspectacular, palm-wine highlife outings from the West African tradition, distinguished by some masterful drumming, but diminished by strangely inept alto saxophone contributions. (Saxophonist Hosea Taylor is more convincing on flute, but even here, he's eclipsed by Ilori's pennywhistle, winningly showcased on the Irish sea shanty-derived "Follow Me To Africa.")

The separation between the drums isn't great on the recording, and there's too much tinny top on the call and response vocals—but traditional West African music wasn't engineer Rudy Van Gelder's main area of expertise, and recording technology in the early 1960s wasn't what it is today. By the time the final three tracks here were recorded, Van Gelder had it down more sympathetically.

Each of these three tunes runs approximately thirteen minutes and includes extended horn, traps and African drum solos. Elvin Jones' thrilling and uplifting interaction with the drum choir of Ilori, Chief Bey, Roger Sanders, Ladji Camara and Sonny Morgan is a feature of the mid-tempo groove of "Gbogbo Omo Ibilie" and the hotter and more intense "Agbamurero." Their dialogue continues on the cool-down closing tune, "Igbesi Aiye," which gets into some fine cross-rhythmic work.

Donald Byrd (trumpet) and Hubert Laws (tenor saxophone and flute) both contribute convincing modal solos to each tune, giving a taste of the aesthetic Pharoah Sanders and Alice Coltrane would develop later in the decade.

Ilori went on to work Harry Belafonte, Miriam Makeba and Hugh Masekela. It's taken forty years to release these latest tracks, but they're resoundingly well worth the wait.