By John Kelman
December 8, 2007
Sign in to view read count 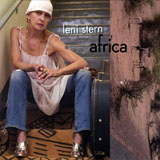 While her husband, guitarist Mike Stern, has been bringing a fascination with the music of Africa to his own projects since the early part of the decade, they've always remained undeniably jazz recordings, with conventional instrumentation. Guitarist/vocalist Leni, on the other hand, has made a more definitive dive into the continent's musical pool with Africa.

Leni Stern's early records were, like Mike's, more definitively jazz-centric, but in recent years she's evolved into a singer/songwriter, albeit one with more chops and an affinity for electric guitar. Recorded largely in Mali, with additional sessions in Senegal and San Francisco, Stern's writing for Africa could easily be envisioned in other contexts, but with a group of largely African musicians playing instruments including variants of the n'goni (a stringed instrument ancestor of the guitar) and assorted percussion instruments, Africa possesses a cultural authenticity, despite Stern and some of her American cohorts, at times, taking the music a little westward.

Stern possesses a voice bordering on the fragile—somewhat reminiscent of Robin Holcomb but with its own quiet strength—and meshes beautifully with vocalist Ami Sacko and her husband, n'goni player Bassekou Kouyate—both Malian stars in their own right—who help define the overall texture of Africa. Co- writing with Sacko, the lyrics range from English to French to Arabic and Bambara, with music ranging from the hauntingly plaintive "Saya (Farewell), dedicated to the late percussionist Don Alias, and the folksy "1000 Stars, for the late saxophonist Michael Brecker, to the more groove heavy "Keita and "Simbo. Brecker can be heard on "Saya and the more upbeat "Ousmane, recorded before he passed away in January, 2007.

As a guitarist, Stern is remarkably malleable. Her clean, warm tone on tracks including "Ousmane clearly comes from immersing herself in the tradition, while on the djembe and talking drum-driven "Alu Maye she draws a line to the blues, bending notes and interacting with Kouyate's n'goni and a chorus of vocalists. Stern adopts a grittier tone that's fitting for "Childsoldier the most overtly political song on the disc.

While ethnic instruments pervade the music of Africa, drummer Will Calhoun provides a largely restrained pulse on songs including "Forest Song, the brief instrumental closer that features Stern trading off with Kouyate, and grooves in-the-pocket with bassist Paul Socolow on "Keita, which features another gritty solo from Stern.

Music aside, it's storytelling that's at the core of Africa Stern's writing has always been more about narrative rather than personal confession, and it's that same aesthetic so endemic to the music of Mali that makes it such a perfect fit for Stern. An album of complex emotional depth, Africa stands as one of Stern's finest to date, a perfect confluence of lyrical substance and instrumental excellence.