By Marcia Hillman
August 3, 2007
Sign in to view read count 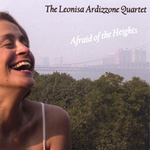 Vocalist Leonisa Ardizzone shows off a variety of moods and material on this, her debut CD, where she is joined by Chris Jennings (guitar), Bob Sabin (bass) and Justin Hines (drums), operating as a group rather than a vocalist with a backing band.

The CD is a collection of standards and original material by both Hines and Jennings. Most of the standards are not the overexposed ones, with the exception of "Nature Boy.

The quartet has been playing together for eight years and is an expectedly tight unit. Jennings has a linear melodic style, which goes well with Ardizzone's voice. Ardizzone has a relaxed way of delivering a song, but manages to get all of the words out on "Anthropology, a tongue twister done up-tempo, which features a scat duet with Jennings.

Two original tracks that are notable are the title track (written by Hines) and "I Got Lucky (written by Bryan McCann, Ardizzone and Jennings). The former is a song about the NYC neighborhood of Washington Heights and is done in a 1920s style with Jennings performing as "banjo player. The latter is a catchy, well-put together piece of material that could easily make some noise as a crossover pop single.

In a mid-July, 2007 performance at New York's The Kitano, the group became a quintet with the addition of pianist Jess Jukovic. Ardizzone delivered several songs from the CD as well as some standard pieces. Her version of Jobim's "Triste included English and Portuguese lyrics, and "Nature Boy started off with a chorus in Italian followed by one in English. Ardizzone has a personable stage presence and, although the intimacy of the CD was somewhat lost with the enlargement of the group, the players had a good time making music together.