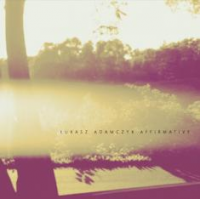 Łukasz Adamczyk is a driven, passionate and charismatic artist with a unique approach to his music. His songs are melodic and catchy, yet energetic and uplifting, seamlessly blurring lines and barriers between various genres. The key element behind Adamczyk's sound is certainly his extremely eclectic approach as a performer. On his recent release, Affirmative, Adamczyk has mastered the fine art of writing songs that are deeply personal, yet sophisticated and deep in terms of production and dynamics.

The Polish-born Adamczyk has picked up where he left off from his previous EP, After Ego. With influences ranging from painter Salvador Dali to flamenco bassist Carles Benavent, Adamczyk continues his journey into the fringes of music. Through this exciting new release, he has managed to showcase a very open mind and an eclectic attitude, embracing elements from various inspirations, including ambient music, rock and jazz, just to mention a few. Affirmative is particularly impressive for its broad sonic palette and kaleidoscopic taste.