By Pascal-Denis Lussier
May 3, 2017
Sign in to view read count 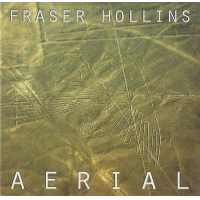 A fitting description of bassist Fraser Hollins' 2010 album, Aerial, his first as composer and leader, because, vaguely, in many ways, this is a grand album. Before accusing anyone of hyperbole, please read on. Montreal-based, Ottawa-raised bassist Fraser Hollins' reputation as a well-schooled, gifted accompanist and fine, inventive soloist is set and highly praised. The focus here should be that he's revealed just how serious he is about making lofty music and being a grand composer, and why he deserves more attention as a regular composer and producer because of it.

Aerial features entirely original music by Hollins, its initial spark, paraphrasing crudely, a challenge undertaken while in South America, the desire to musically express an epiphanic, harmonious feeling triggered when observing man and nature's grandeur from high up.

Hollins recruited long-time allies, each lending their considerable talent and experience, namely, saxophonist Joel Miller, pianist Steve Amirault, and drummer Karl Jannuska, and the result is big band grandness on a smaller scale, appropriately, given his larger ensemble experience, both in Miller-led projects and with the Christine Jensen Jazz Orchestra, among others. Reinforcing the bigness of this quartet in an invigorating way warranting mention is the careful attention paid to the recording and mixing process; the clarity is superb, all subtleties are captured. Grand stuff.

Whether Hollins composed specifically with these players in mind or how big a role each played in defining their part and shaping the result is unclear, though a mixture of both is the safe bet given how naturally these three exploit their strengths getting to the heart of the subject. Nonetheless, Hollins can lead, too, that's what comes across, and his arrangements and choices give listeners a big, lush (grand?) sound from relatively simple textures powerfully articulated with intricate detail.

The music is straightforward, the compositions all very accessible, opening with a melancholic arco, "Crux," that doesn't set the tone as much as a direction; it's upwards as we move into "Lost in the Maze," and several opportunities to hear just how large and rich a space Hollins can define on double-bass. And Jannuska, whether adding his own brand of accents, dynamically punctuating, sweeping-in soft brush work, or sneaking a nuanced drum roll, he's always perfectly present, like milk in ice cream. The case could well be made for all charts, but Jannuska's contribution on "Currents" is noteworthy.

Sharing the lead, whether with rich, warm tones on tenor or the calm squeal-free heights he colors on soprano sax, Miller drives the themes home then re-shapes them, always with nuanced, beautifully seamless phrases that Amirault either supports determinedly when not joining him in a pitch-pleasing conversation, if not left to lead, Amirault shining several times himself, "Way of the Condor," "Vyana," and "Song for the Underdog" good examples, the first being the album's longest, most evocative and grandest chart. Hollins exploits the piano's rhythmic abilities well, using this to attain his central goal several times by progressively building stress through intensity, but it's a positive tension that sucks us upwards, and by the time Miller ever so sweetly takes over from Amirault we are soaring, enjoying an Aerial view.

Sadly, the more spiritual "Vyana"' gets its residual mood crushed by the first few lines of the next track, the suite's first of three, "Skyward," which are far too reminiscent of '60s or '70s TV theme songs, though this fades fast.

Hollins also multitracks an electric base over some of these, finally surrendering fully to electricity on the album's closer, "All's Well."

Somehow, in an intangible way, a rare level of intimacy and respect for the subject matter is conveyed, and, for listeners, that four musicians should occupy the same personal/mental space so completely and deliver such depths consistently throughout an entire album, this, in itself, makes a jazz album special. With Amirault now in Toronto and Jannuska in Paris, this incarnation may be unique. A kind of grand thing.

Unfortunately, attempting to communicate this album's true strengths beyond the above would require further degeneration, all the way down to the level of abstract concepts like exaltation and masjetic and sacred and... Lotta good that does anyone. Much like grand.

But therein lies the problem, those concepts are part of this album's theme and raison d'être. And it manages them and transmits their core notions extremely well, so, other than with an honest listen, how does one justifiably transmit 'grandness' and avoid coming off as flaky?

But here we are. A grand album. A grand claim. Indeed. Calling it a must-have wouldn't be honest, but those who do take the time to listen to it will, through the madly skillful playing, undeniably associate deeply with some aspect of these compositions, making it a grandly personal and hope-filled experience.

He deserves a new challenge.