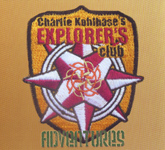 A longstanding veteran of the Boston jazz scene, multi-instrumentalist Charlie Kohlhase's skills as a bandleader were honed as a member of the esteemed Either/Orchestra and through collaborations with legendary saxophonist John Tchicai. The Explorer's Club is his newest venture, a powerhouse line-up featuring two drummers. Encompassing a range of dynamics, from AACM styled impressionism and Mingus-inspired collective interplay to riotous New Thing-era free expression, the septet exudes a mercurial sensibility redolent of Kohlhase's former teacher, trombonist Roswell Rudd.

A versatile and inventive writer, Kohlhase pens intricate charts, balancing the rich multi-layered voicings of a large ensemble with the nimble dexterity of a small combo. Maximizing the ensemble's raw sonic potential, his clever arrangements veer from the thorny contrapuntal fantasy of "Superhero Beatdown" to the ornate unison lines of "Utensor."

Embracing the collective aesthetic of the AACM, Kohlhase seeds his pieces with tumultuous group improvisation, rapid fire call and response dialogues, spacious cadenzas and other conversational strategies. Instilling a communal sensibility into the group's free ranging excursions, he allots his sidemen ample solo time, revealing his own visceral approach on such fare as "Thryllkyll On The Schyllkyll/Psychopath On The Cyclepath," sputtering bristling baritone cadences over roiling percussion.

Adventures, their Boxholder debut, contains a number of titles inspired by Kohlhase's comical superheroes, such as Loquator, Taciturnator and Utensor. One such entry in his 'superhero' series, the boppish "Loquator & Taciturnator," portrays a conflict between the verbose Loquator and the brusque Taciturnator. A rousing variation on the classic notion of trading fours, the brisk tune stages an extended string of effusive cadences against spare retorts from a rotating cast of soloists.

Kohlhase's magnanimous spirit extends to authorship as well. Charland's tender ballad, "Kohlhase And Forever" is the album's most tranquil departure, while "Stealing Beauty/Potuder Time" and "Decide For Yourself" were written by Kohlhase's venerable associate John Tchicai. The latter tune spotlights drummers Miki Matsuki and Chris Punis, as they stretch out supported by driving vamps from the riffing horn section and strings.

Dedicated to a real 'superhero,' "The Star Of The Show" closes the album with a funky homage to James Brown. Kohlhase and Langley's unaccompanied, elliptical tenor banter opens the piece, followed by a vibrant, serpentine solo from Hofbauer, with the whole septet reconvening at the coda for an exuberant finale.

A bracing and bold album, Adventures is an appropriately titled debut for Kohlhase's newest ensemble.