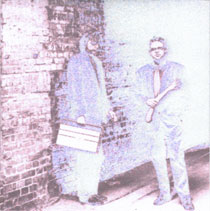 Hmm, this is an oddity. The duo of guitarist Michael Renkel and drummer Burkhard Beins call themselves Activity Centre. Mowen & Moos was their double CD (one CD called Mowen, the other Moos ) released on 2:13 records in 1999. You are unlikely to have heard it (or even seen it) as it was released in an issue of only 150 copies, each with individual cover art by Fehmi Baumbach; an instant collector's item. Now this (single) CD is Renkel's remix "based exclusively on sound material" from the original album. OK, it isn't Panthalassa, but attribution starts to become difficult. And from your point of view, why be interested in the remix of an album you never heard in the first place?

Well, leaving all of that aside, this is very good in its own right. In the true spirit of remixing, Renkel has imposed his own personality and vision on the original material, creating music that has an independent life away from the source material. There are plenty of electronically generated effects plus enough repeated sections to impose rhythmic pulses throughout. Dance music it isn't, but there are large chunks that will have an appeal beyond aficionados of free improvisation. Maybe the strangest aspect is that Renkel was one of the original players but has produced a remix that seems to subvert the original music. Intriguing.