By Edward Blanco
December 13, 2008
Sign in to view read count 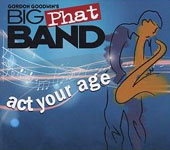 Band leader, composer and instrumentalist Gordon Goodwin takes his 18-piece Big Phat Band to another level, producing a rare CD/DVD set and garnishing a heap of praise from critics and the Grammy folks alike. Act Your Age is one heck of an album, having received three 2008 Grammy nominations for Best Large Jazz Ensemble Album, Best Instrumental Composition (Goodwin's "Hit The Ground Running"), and Best Instrumental Arrangement (Goodwin's arrangement of "Yesterdays"). This makes for a total of 11 nominations, and one overall win for Goodwin since 2000, when he began recording with the Big Phat Band.

Already established as a first-rate composer and arranger, Goodwin presents seven originals along with dynamic arrangements of five standards, completing an exciting package of big band music. The Big Phat Band is a world-class orchestra, containing some of the best players on the west coast, including reedmen Eric Marienthal, Sal Lozano and Brian Scanion, trumpeters Wayne Bergeron and Bob Summers, and trombonists Andy Martin and Alex Isles. A multi-instrumentalist himself, Goodwin performs on the piano as well as tenor and soprano saxophone.

For this unique recording, Goodwin brings in some special guests that help put the finishing touches to this outstanding set, even enlisting the talents of Art Tatum through the help of virtual technology, an electronic process by which the late pianist's recording of the Jerome Kern classic "Yesterdays" is digitized and woven into a Goodwin big band arrangement. Others notable guest spots include Patti Austin's vocal turn on "September," also featuring guitarist Lee Ritenour. Ritenour also appears on "Punta Del Soul," alongside longtime collaborator, pianist Dave Grusin. The great Chick Corea lays down some incredible piano lines on his own riveting "Senor Mouse."

The title piece is a very bouncy, funky tune featuring bassist Nathan East and Marienthal on alto on perhaps the album's wildest score. In contrast, Goodwin takes a tasteful bow on soprano for his beautiful, soft ballad "Chance Encounters," another of the many outstanding tunes on Act Your Age. "Backrow Politics" offers a sampling of some excellent horn play from Bergeron and Summers, who both contribute terrific solos. Tenor saxophonist Scanion takes center stage on "East Coast Envy" and "El Macho Muchacho," while the leader's tenor shines on the finale, "Gumbo Street."

Act Your Age has all the elements of a successful, award-wining album, with a cast of luminaries, gorgeous charts and first-rate musicianship from a world-class big band. Once again Gordon Goodwin and his Big Phat Band make a musical statement that lovers of the genre will not soon forget.