Danilo Perez: Across the Crystal Sea 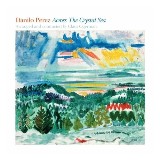 The cover art is descriptive of the recording's music—gentle brushstrokes of pastel colors portraying a picturesque vista of tranquility. This visual is indicative of what's in store from pianist Danilo Pérez's most challenging release to date, Across the Crystal Sea.

A pianist whose tenure with the Wayne Shorter Quartet (e.g., Beyond the Sound Barrier (2005, Verve Music)) is etched in modern jazz. Born in Panama and living in Boston, Pérez is also a leader/composer whose recordings have earned him acclaim and awards in Latin jazz (including a Grammy). But he doesn't seem to be resting on past laurels as he is quoted, "My experience with Wayne has taught me to go to unknown places."

One unknown place led to the realization of Across the Crystal Sea, an orchestral recording with Pérez and a stellar quartet (bassist Christian McBride, drummer Lewis Nash, percussionist Luis Quintero and vocal stylist Cassandra Wilson on two tracks) performing with none other than arranger/conductor Claus Ogerman, whose work is synonymous with excellence. One who possesses an affinity with jazz as heard in his collaborations with Antonio Carlos Jobim, Bill Evans, Diana Krall, Michael Brecker and others.

With the exception of two standards, "Lazy Afternoon" and "(All of a Sudden) My Heart Sings" (both vocal compositions), the recording features Ogerman's compositions that are based on themes by classical composers Rachmaninov, Massenet, Sibelius and others. This daunting task is not simply a "jazz quartet with strings" session but a seamless entity where the charts and musicians uniquely coalesce; witnessed in the gentle winds of the title song and the dramatic impetus in "Saga of Rita Joe."

The two standards feature Wilson's exquisite talent, proving her merit as one of today's preeminent jazz singers. Her husky voice is so alluring and romantic on "My Heart Sings" that it feels as if she's singing directly to the listener. From start to finish, this non-suite set feels like a connected work, culminating with the stirring "Another Autumn" as it reaches a pinnacle of grand design.

A leader's ability to take chances and submit to the unknown is what sets these pieces apart from the rest. Pérez did so on this recording and the results speak for themselves. Across the Crystal Sea is pure bliss, allowing the listener to escape into a world of sumptuous and immaculate music.