BY DOUG COLLETTE
October 21, 2018
Sign in to view read count 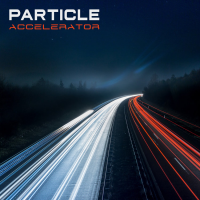 Contrary to prevailing popular opinion, electr(on)ic keyboards are not just for noodling in ever-so-cheesy, toy-like tones. In the hands of the titular leader of Particle, keyboardist/vocalist Steve Molitz, for instance, those instruments are lethal weapons with which, on the group's first album in fourteen years, he sets out to destroy preconceptions about what righteous creations can derive from the intelligent, open-minded use of such devices.

It's not just for show or by accident Molitz' keyboards dominate the sound on tracks like "Wire." Synthesizer blasts encircle the looping here, while electric piano illustrates not just the man's touch for detail, but the fully-evolved means by which this band composes its original music from the spontaneous likes of jams and more structured demo recordings. Much like this dramatic opener, Particle exhibits a distinct evolution for the band, in its current configuration, throughout this (surprisingly). just the group's second studio effort, co-produced by Steve Molitz with Clay Parnell and Particle.

Alternately jagged and explosive even down to the borderline contrived vocoder vocals on the otherwise evocative "All Night," the nine tracks here conjure an otherworldly soundscape, in part through Michael Daum's jagged electric guitar as it complements Molitz' instruments. Think Bladerunner—especially if listening on headphones, a somewhat daunting prospect-but also on comparably softer (but little less insistent) tracks like called "Home Away From Home." Thankfully, bassist Clay Parnell and drummer Kito Bovenschulte bring an earthy and decidedly human feel to these recordings, and not just on the syncopation-laden "Star City,"

This mix of musicianship and studio technique (forged at Applehead Studios in Woodstock NY and game developer Saber Interactive) is not the gimmicky likes of Daft Punk, but the logical extension of groundbreaking work by The Who's Pete Townshend, the late Patrick D. Wright of Pink Floyd and Tangerine Dream. And let's not forget Jan Hammer of The Mahavishnu Orchestra, especially during the near-majestic title track here where guitars mesh with synthesizers and vice-versa: this record fulfills the near-mythic status Particle attained on the semi-hiatus that's ensued since its debut album (during which time Molitz worked with the Grateful Dead's Phil Lesh and surviving members of The Doors).

As such, cuts like "Devil's Work" posit Particle as a band with muscle as well as Moogs. It's all in keeping with the kinetic cover art, a deceptively colorful near-3D image that, like "Gustava" and the closing "Bravo Delta," radiates discernible motion in a direct reflection of the sounds panning across the stereo spectrum so judiciously on Accelerator. Little wonder there's evidence of real sweat generated in the playing, recording and engineering of this record, so, in keeping with the atom-splitting overtones of its title, taken together with the band's name, this Particle Accelerator record may simultaneously pulverize and multiply listeners' opinions on such music. This is not your father's (or your offspring's) electronica.