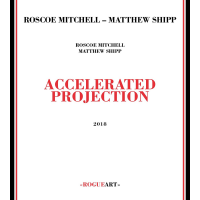 The level of musicianship exhibited on the Roscoe Mitchell-Matthew Shipp collaboration Accelerated Projection is amazing to behold. Mitchell of course co-founded the influential Association for the Advancement of Creative Musicians (AACM), which gave birth to many great "free jazz" musicians. He also co-founded the Art Ensemble of Chicago, a group that has achieved legendary status among many of the jazz intelligentsia. Shipp, a stalwart of the New York City scene, was part of the legendary David S. Ware Quartet and has over the last two decades gone on to create highly original works of free and abstract compositions of the first order.

This series of improvisational free jazz compositions was recorded live on August 28th 2005 at Sant'Anna Arresi, Sardinia, Italy. One wonders why it took so long to get this tour de force released, but such are the vagaries of the jazz music scene today.

There are seven Accelerated Projections in all. Just what is being projected in this music? Is it anger? Anxiety? Fear? Hostility? The sheer amount of force applied suggests these things. But there is also an abstract lyricism. A "flow of things." A "sound and fury." Sometimes there is a bluesy underpinning followed by loud roars and squeals. And at other times, the music creates an eerie almost haunting feel. In its total, it is unrelenting.

Mitchell emphasizes his unique range of sound on his saxophones. He slides up and down the sax like water in mountain rapids. Mitchell showcases his circular breathing and his use of the reed to create slaps, squeaks and honks. But he never loses control of his instrument. He welds it like a mighty sword slicing through sonic space.

Shipp brings his complete piano vocabulary to bear as well. Pronouncements by the left hand are accompanied by pounces from the right hand. The fingers roll across the keyboard from top to bottom and bottom to top. Under Shipp, the piano explodes with fury in one measure and in the next backs off into abstraction. Shipp even gets inside the piano to tweak some notes.

The two musicians feed off each other's energy. At times the music becomes a barrage of sound so massive the mind races to keep up. Is this a musical event horizon?

In the end, the music projects emotional intensity. For those brave enough to accept its challenge, Accelerated Projection is undiluted free jazz at its finest.